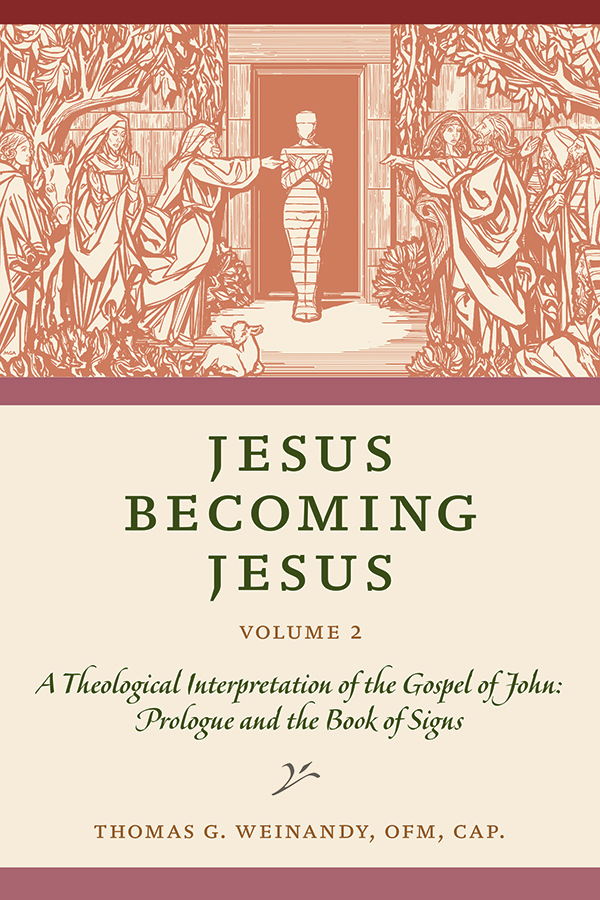 Q: You studied the Gospels of Matthew, Mark, and Luke very carefully to craft your commentaries for Jesus Becoming Jesus, Volume 1. But now, spending a whole book (two, in fact!) on solely John’s Gospel, I imagine you’ve gained an even more profound appreciation for the Johannine corpus. What is a new revelation you’ve had while working on this series in regards to how the Gospel of John differs from the synoptics?

A: In my first volume on the Synoptic Gospels, I focused, almost exclusively, on the revelatory actions contained within the Gospels, such as, the conception and birth of Jesus, Jesus’ baptism, Peter’s profession of faith and the Transfiguration, Jesus’ triumphal entry into Jerusalem, and Jesus’ passion, death, and resurrection.  I wanted to emphasize that revelation is primarily through acts and not simply that of words.

When I took up the task of theologically interpreting John’s Gospel, I wanted to continue this same emphasis, though, unlike my study of the Synoptics, I did a verse-by-verse theological interpretation.  This was much more daunting, but also extremely rewarding.

Almost from the onset of my theological interpretation of John’s Gospel, I concluded that there were at least four overarching points.

First, John was writing his own theological interpretation of the one gospel tradition that is found in a threefold manner within the Synoptic Gospels.  He wanted to bring to the fore and articulate the theological doctrines contained within the one kerygmatic apostolic tradition. Ultimately, John wanted to demonstrate, as he himself states at the end of his Gospel, that Peter’s profession of faith is true – Jesus is the Christ, the Son of the living God.

Second, John’s overall theme was the re-creation of humankind.  As the Father first created all that is through his eternal divine Word, so now the Father is re-creating humankind through his Incarnate Word.  This re-creation, while initially symbolized in his miracles and articulated in his “I am” sayings, is fully enacted within Jesus’ death and resurrection, and in his breathing forth of the Holy Spirit upon his apostles – the apostolic church.  This recreation, then, is the story of Jesus becoming Jesus – YHWH-Saves.

Third, in order to reap the benefits of Jesus’ re-creating, saving acts, one must to come to believe that Jesus was truly the Father’s only begotten Son.  Moreover, one must be born anew of the Spirit in the living-waters of baptism and partake of the bread that comes down from heaven, that is, Jesus himself – his risen body and his risen blood.  In other words, to be re-created, one had to come to abide in him who literally embodied this re-creation, the risen and glorified Jesus himself.  Thus, John articulates, through Jesus, a very mature theology of the sacraments of baptism and the Eucharist.

Lastly, I became convinced, contrary to what is often held, that John wrote his Gospel primarily for his beloved unbelieving Jewish brethren.  Within Jesus’ contentious dialogues with the unbelieving Jews, John is allowing the Jews to express their own reasons as to why they think Jesus cannot be the anointed Messiah nor the Father’s Son.  In so doing, this allows Jesus himself to articulate why their lack of faith is unfounded – he is obediently doing his Father’s will and so revealing that he is the Father’s Spirit-anointed Son.  Thus, John’s Gospel, far from being anti-Semitic, is actually a loving call for his Jewish brethren’s conversion.

Much more could be said about the liturgical feasts within John’s Gospel, such as the Feast of Booths and especially the Passover, but I hope that the above provides some flavor of my theological interpretation of the Evangelist’s Gospel.

Q: What was your main priority when writing these theological interpretations of the gospels? What did you aim to bring to the conversation?

A: I am not a scripture scholar, but a historical/systematic/doctrinal theologian. Nonetheless, over many years, I have loved the scriptures.  Actually, when I set out on this adventure, I planned to write a one volume systematic theology, but once I got into the scriptural basis for the various doctrines, I thought the Lord told me to just “stick with the scriptures.”  This is what I subsequently did for the next seven years.  Because I am not a scripture scholar, my treatment of the Gospels is far different from what one would normally find within the usual scriptural commentaries.  This is precisely why I refused to call my treatment of the Gospels a “commentary,” but rather I wanted to emphasize that I was writing a “theological interpretation.”  I focused on the doctrines contained within the scriptural texts – the Incarnation, the sacraments, Jesus’ death and resurrection, his ascension and the out pouring of the Holy Spirit.  It may sound arrogant, but I would like to think that my “theological interpretation” of the Gospels is far more informative and helpful to the reader than most contemporary biblical commentaries; and, I hope, more enjoyable and fulfilling.

Q: When it comes to writing about scripture, is there ever any differentiation between the stories or passages that hold great personal spiritual significance for you and the ones that capture your theological intellect? If so, how do you choose to balance them?

A: In writing my theological interpretation of John’s Gospel, as I progressed from verse to verse and chapter to chapter, the more I learned, the more I loved the texts.  In the end, I loved every verse and every chapter.  I think the principle is: The more truth we come to know within scripture, the more we love scripture, for scripture is the anointed word of God and Jesus as the heart of all scripture.  So “loving the truth of who Jesus” is the goal of scriptural and theological study.

I must add that, although I have written three books on the Gospels, I have, in the process come to love not only the whole of the New Testament more fully, but also the Old Testament.  It is impossible to grasp the truth of the New Testament without knowing the Old Testament, for the Old Testament prefigures the New and the New fulfills the Old – God’s revelation is one complete whole. What I found quite moving was the relationships between Jesus, Peter and John.  Jesus, obviously loved both of them.  What I found unique is that John often looks after Peter.  He has a real brotherly care for Peter – even in the midst of Peter’s threefold denial.  I think John’s loving care for Peter has to do with the fact that he recognizes that Peter is the head of the apostles and that it is his profession of faith in Jesus that is the rock of upon which his own Gospel is built.

Q: What was the most difficult or taxing part of the Prologue and Book of Signs to write about? What part was the easiest?

A: I do not think that some texts were more taxing and that some were easier.  All texts presented their own theological challenges. For example, when theologically interpreting John’s Prologue, I found it challenging to connect correctly and fully the Prologue with the Book of Genesis.  The effort was magnificently rewarding, even if it took a great deal of thought and precision in writing.  Moreover, it was a challenge to show that the Prologue was truly a prologue – it is an introduction to the entire Gospel.  One had to look ahead to what was to come, and also, as the work progressed, one had keep looking back to the Prologue.

One of the most difficult challenges was to address the issue as to why Jesus speaks in such a different style and manner in John’s Gospel than he does in the Synoptic Gospels.  In the Synoptic Gospels, Jesus speaks, in a sense, in a much more “human” manner, where in John’s Gospel, he speaks in a more elevated stylized manner.  Why is this?  I concluded, and I am confident that I am correct, that John has done something extraordinary, something only he could do.  Because John is writing his own theological interpretation of the one kerygmatic gospel tradition, and so wants to provide the fuller theological and doctrinal understanding of what is contained in that tradition as found within the Synoptics, he allows Jesus himself to articulate that fuller theological and doctrinal understanding.  Thus, I concluded that often, but not always, the words that Jesus speaks are actually the words of John.  However, and this is of the utmost importance, the theological and doctrinal thoughts expressed are authentically Jesus’ own, and so possess a historical basis.  We may not have Jesus’ very own words, but what we do possess in John’s Gospel is Jesus’ very own thoughts – the full revelation of who he is and what he taught.  Because John resided within the very heart of Jesus, he was able to express what was truly in Jesus’ heart and mind.  It is quite remarkable what the Evangelist has done – simply unique.  This why it is sometimes difficult in John’s Gospel to discern whether Jesus is speaking or whether John is speaking – in the end, they possess one and the same voice.

Again, a great deal more could be said about what I learned in writing my theological interpretation of John’s Gospel, but above all I came to love Jesus more, and my hope would be that the reader would come to a greater love for Jesus as well.  As I found a joy in writing Jesus Becoming Jesus, so I hope the reader will also experience this same joy.