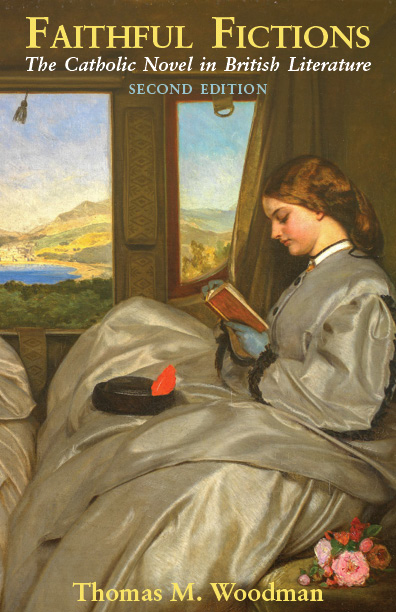 The following is an excerpt from the new second edition of Thomas M. Woodman’s Faithful Fictions: The Catholic Novel in British Literature (CUA Press, 2022). Thomas Woodman was Lecturer of English at University of Reading from 1975 to 2010. He is the author of A Preface to Samuel Johnson (Longman, 1993).

“Practically a Protestant Form of Art?”

Sir Hugh Walpole once wrote that he was opposed to the spread of Roman Catholicism because it would be bad for the novel. In another well-known comment, George Orwell wrote that:

The atmosphere of orthodoxy is always damaging to prose; and above all, it is completely ruinous to the novel, the most anarchical of all forms of literature. How many Roman Catholics have been good novelists? Even the handful one could name have usually been bad Catholics. The novel is practically a Protestant form of art; it is a product of the free mind, of the autonomous individual.1

Extreme though these views may seem, there is a sense in which the critical consensus about the novel that existed for many years might have been held to support them. “The novel,” wrote Georg Lukács resoundingly, “is the epic of a world that has been abandoned by God.” According to Peter Faulkner, it is the “one secular literary form.” Ian Watt’s inﬂuential The Rise of the Novel (1957) presented the most detailed case for the genre as essentially realistic, its origins profoundly linked to the development of the modern secular world.2 Increased prosperity and middle-class literacy had given a far greater proportion of people the opportunity to lead reasonably comfortable and fulﬁlling lives. What especially appealed to such readers were ﬁctionalized yet realistic life stories of heroes and heroines with whom they could identify, whose adventures they found to be both more thrilling and signiﬁcant than their own and yet in some ways parallel to them.

The development of the novel is thus bound up with increasing democratization, with a degree of improvement in the education and status of women and, indeed, with the whole liberal bourgeois ethos of the modern world. Its realm is social life and personal relations in a pluralist society. Lawrence Lerner says that “there is clearly a link between individual characterization and the humanist tradition: before we promoted the individual to be the touchstone of our moral values, we did not make him the unit of literary creation either.” W. J. Harvey likewise emphasizes the importance of character, individualism, and social pluralism. Since the realistic novel has to be regarded as the central classic tradition of English ﬁction, the novelist is almost by deﬁnition “liberal, pluralist, foxy; his typical subject is the partial, the limited, the relative, the imperfect—in other words, the merely human rather than the overarching non-human absolutes.”3

A kind of agnosticism is thus seen as built into the very core of the genre. Human beings have come to ﬁnd the central meaning of their lives in their own individual, time-bound, necessarily partial and imperfect experiences rather than in “the revealed plots that appeared to subsume transitory human time to the timeless.” The rise of the novel is related quite speciﬁcally to the “declining authority” of these “proverbial plots” of revealed religion; it is a side-product of the process by which history replaces theology as the main mode of organizing and understanding human experience.4 Writers who continue what Harvey calls a “monist” mode where “metaphysical or ﬁnal issues” arise and “where a total commitment to one ideology is envisaged” may produce “a kind of ﬁction—romance, fable, the novel of ideas,” but not the central form.5

Recent critical theory, of course, has reversed many of the old orthodoxies about the novel. The origins of the genre have once again become a matter of considerable debate. Elements of romance from which the novel was once distinguished are now recognized to be endemic within the “new” form. More crucially, contemporary criticism has come to recognize that “realism” is itself essentially an illusion, the product of art. Post-modernist ﬁctions that constantly stress their own artiﬁciality have come now to replace the classic realist text as, in a sense, the deﬁnitive form.6

The image of international Catholicism has itself undergone a change since the Second Vatican Council. The Church began to pay more attention to the individual conscience, to ecumenism, and to social justice, although there has also been ﬁerce resistance to these trends in some quarters. Yet for a long period, Catholicism had seemed powerfully authoritarian and reactionary, and it was understandable that it should have been seen as set against all the social and political developments on which the genre of the novel was held to depend.

Of course, Catholics all over the world have written novels. One rather incomplete bibliography of “The Catholic Novel” lists over seventeen hundred examples, as well as a variety of criticism.7 Despite what Orwell and others say, a case could be made for the view that the art and symbolism of the Catholic tradition makes it more fertile ground for the novel than other forms of Christianity. After all, although there are puritanical forms of Catholicism, the mainstream tradition is not anti-art, including literary art. Peter Ackroyd, who attended a Benedictine school, has said that one legacy of a Catholic upbringing is a sense of “a sacramental view of language. Chanting those Latin chants for your formative years is a great help in trying to write English prose. The greatest gift religion can give anybody is the use of language.”8