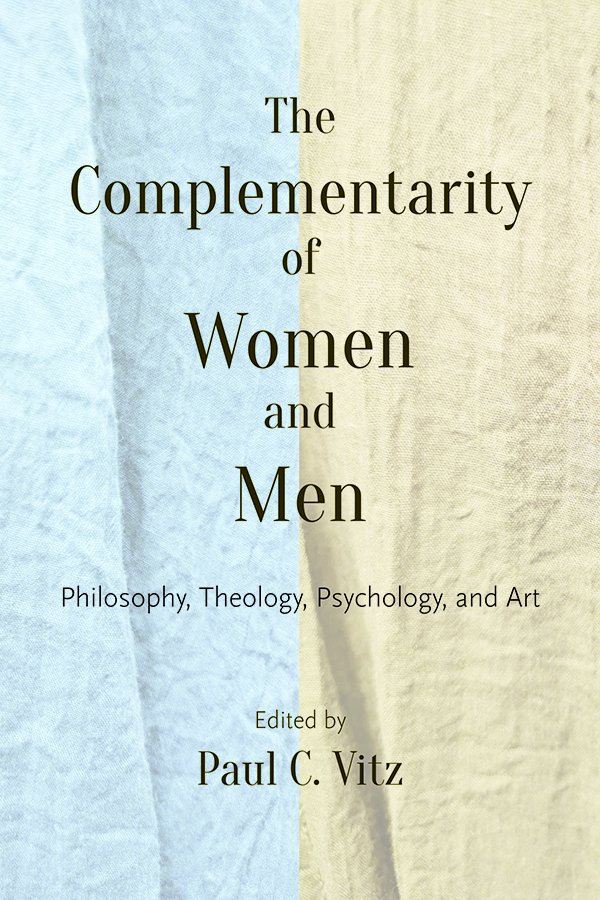 Paul Vitz is professor emeritus of psychology at New York University and senior scholar and professor at Divine Mercy University, Sterling, VA, as well as the author of The Complementarity of Women and Men: Philosophy, Theology, Psychology, and Art (CUA Press, 2021).

In working with and reading my co-authors, I came to a deeper appreciation of just how important our male and female bodies are. Major movements today claim not only that there is no longer a male or female nature, but—even more extreme—some claim that there is no basic human nature at all. “Transhumanism”, for example, aims to remove some, and eventually all, bodily properties from us and to create a new kind of life. The implicit claim is that we are not created by God with a human nature, including being male or female; rather, we are already being created by us human beings, in whatever ways we might choose. Thus, there is no human nature, only constantly changing identities, thanks to new technologies—and, of course, human pride.

This complementarity book with five chapter authors, three women and two men, presents a strong case that women and men have a nature that is significantly different from each other, but that the two sexes have equal dignity. This position solves the problem of assuming that there are no important differences—which denies the evidence and is simply false—and it solves the moral problem of assuming that one sex is superior to the other.

Furthermore, men and women, when they work together, create a positive synergy (a concept developed especially by Sr. Prudence Allen): there is something greater than either sex could create alone. The best and most obvious (but not the only) example of synergy is the creation of a child and a family.

The rational concept of the sexes having significant differences but being of equal dignity receives strong support throughout the book, as explored in chapters by J. Budzieszewski (on the difference between being the same vs being equal) and Deborah Savage (on Male Genius and Female Genius). Extensive evidence for differences and complementarity also comes from research findings in psychology and neuroscience (as presented by Vitz). And as a special treat, complimentarity gets surprising support from Michelangelo’s paintings in the Sistine Chapel, described by Elizabeth Lev.

The book has received impressive endorsements which have gratified all of us who worked on the volume. I especially appreciated Helen Alvaré’s comment that the book is essential for dealing with today’s disturbing gender ideology, and that its language is accessible to a wide variety of readers. Numerous readers have also commented favorably that the chapters make a mutually supporting, integrated whole.