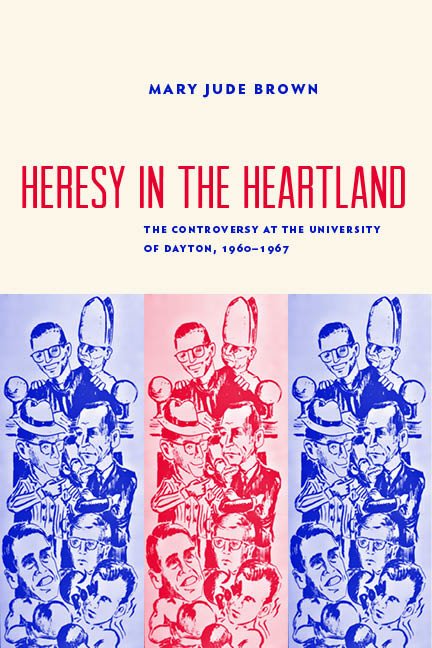 We were delighted to get the opportunity to interview Mary Jude Brown about her new book, Heresy in the Heartland: The Controversy at The University of Dayton, 1960-1967 (CUA Press, 2022). Brown is retired from the University of Dayton. At the time of her retirement, she was Associate Dean for Financial, Information and Data Analysis for the College of Arts and Sciences.

Q: Firstly, could you give a brief summary of what the Heresy Affair was?

A: The Heresy Affair was a faculty controversy in the University of Dayton’s philosophy department. Thomists and proponents of newer philosophies began sparring publicly around 1963. Over time, the debate topics expanded from the relevance of Thomistic philosophy to contemporary moral issues such as contraception, abortion, and situation ethics. The level of intensity rose, polarizing the department. The tone of the debate often deteriorated to name calling and snide remarks.

The event that elevated the controversy to a national level was a letter written on 15 October 1966 by assistant professor of philosophy Dennis Bonnette to Archbishop Karl J. Alter of Cincinnati with a copy sent to the Apostolic Delegate. In the letter, Bonnette listed several on-campus events and named four lay faculty he believed were out of line with church teaching. Bonnette asked the archbishop to intervene because the situation, in his opinion, had reached the “point of doing grave harm to the faith and morals of the entire university community.”

Q: The Heresy Affair at the University of Dayton had contemporary controversies at St. John’s University and the Catholic University of America. Why do you think it’s important for Catholics to take note of the conflict at Dayton specifically?

A: Prior to the University of Dayton controversy, the faculty at St. John’s University reacted to the firing of 31 faculty members in the fall of 1965. The issue was firing without due process which the faculty considered to be a violation of academic freedom. In spring 1967, the theology faculty at the Catholic University of America recommended unanimously the reappointment and promotion to associate professorship of Father Charles Curran, whose field was moral theology. The university’s board of trustees, mostly bishops, rejected these recommendations based on Curran’s dissenting views of Church teachings. The theology faculty, and indeed, the entire CUA faculty considered the rejection of Father Curran a violation of academic freedom. These two controversies involved faculty versus the administration/owners of the universities. As such, the controversies focused on faculty challenging religious authorities. Both controversies were investigated by the national AAUP.

The University of Dayton controversy, centered primarily in the philosophy department, involved conservative lay faculty challenging progressive lay faculty about teachings believed to be contrary to official Church teachings. When the university seemingly did nothing about the accusation of false teachings, the conservatives reached out to the local archbishop. Although the progressives labeled the involvement of the archbishop a violation of their academic freedom, the bigger issue is what role does the Church play in Catholic universities, a question that Catholic universities still face. Unlike the St. John’s and CUA controversies, the local AAUP got involved but the national organization did not.

Q: What is a misconception about the Dayton controversy that you’d like this book to help correct?

A: The progressive faculty viewed the controversy through the lens of their academic freedom and their reading of what Vatican II called for. They were particularly influenced by authors such as Leslie Dewart and Teilhard de Chardin. For the conservative philosophy faculty, however, the primary issue was the need to accurately portray the teachings of the Catholic Church. The conservatives heard the progressives tell students that contraception, abortion and situation ethics were acceptable. Although the Church was debating contraception at the time, the conservatives had an unbending view of Church authority and believed the current teachings of the Church should be upheld. Another way to put it is that the conservatives were concerned about truth in advertising: a Catholic university should accurately portray Catholic teachings.

A: The University of Dayton controversy continued to escalate because the faculty did not discuss things in a civil manner. At the time, there was no climate for academic debate. Neither the conservatives nor the progressives had a historical sense and an awareness of the binding authority of different teachings of the Church. The progressives and the university administration did not hear the pastoral concerns of the conservatives. When people hold deeply-felt concerns on moral issues, they are willing to do things that seem unimaginable to others, such as report their fellow faculty to the archbishop.

Those in Catholic higher education should assume that the Church and its bishops are very interested in Catholic universities. Administrators should work with their local bishop to maintain a supportive relationship between the both the university and the Church.

Today, the Catholic Church continues to debate similar moral issues such as communion for politicians upholding abortion, homosexuality and same-sex marriage. Catholics must continue to debate the issues civilly and respectfully dissent, if necessary, keeping in mind the degrees of Church teaching authority. Some bishops do not hesitate to intervene publicly in matters of politics and Church teachings such as excommunication of politicians supporting abortion. The discretion shown in handling this controversy is an example for all levels of authority.