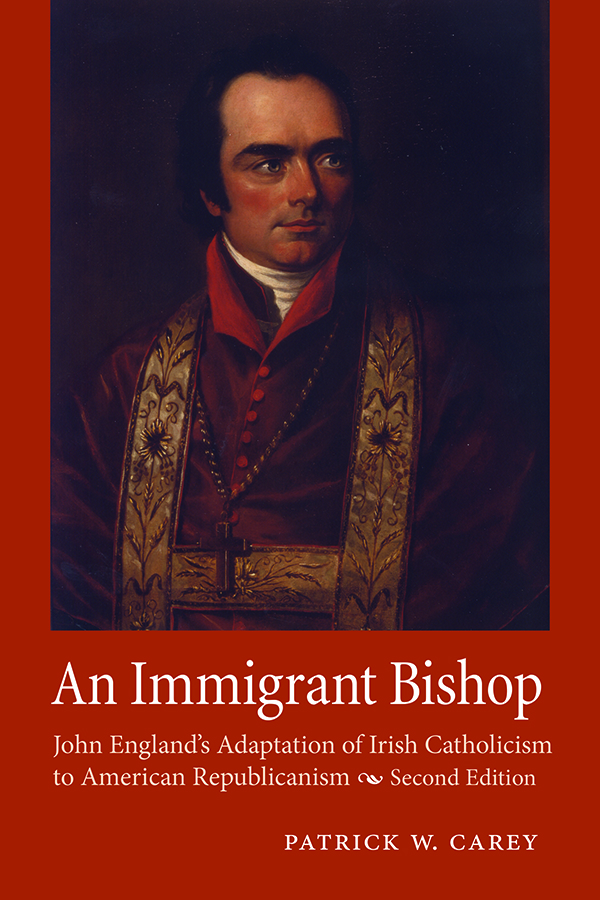 The following is an excerpt from the newly released second edition of An Immigrant Bishop: John England’s Adaptation of Irish Catholicism to American Republicanism by Patrick W. Carey (CUA Press, 2022).

By 1820, England’s intellectual formation as well as his political and ecclesiastical experiences had prepared him in three major ways for many of the political and religious realities and ideologies he would encounter in the United States. First, because of their own political and religious environment, England and his colleagues saw the shifting conditions in the world as advantageous to the Catholic Church; the Irish church, at least, had gained greater freedom because of the eighteenth-century revolutions. He and his colleagues were accustomed to speaking of change, reform, adaptation, republicanism, and democracy as beneficial to the Catholic Church. Although elements in the contemporary world were still inimical to the church, they were seen as extrinsic entities within a world generally full of opportunity, freedom, growth, and promise. England had a general confidence in the future, although he was less than optimistic about the immediate freedom or emancipation of the church in Ireland. This explains, in part, why he differed from the more conservative Irish bishops, felt at home with the Cork anti-vetoists—Protestant as well as Catholic—and developed an openness to the possibilities of some democracy within the church in the United States.

Second, England and his associates had formulated ideological positions that were consistent with those held by many in the American community. The political and religious events caused them to examine the records of the Christian experience in light of their own experiences, justify their desire to preserve their Irish Catholic tradition, and develop a Christian ideological foundation for their hopes for future changes in their civil and religious conditions. In the search, England, in particular, began to read the Scriptures, church fathers, his Gallican theology, and Canon law in light of his political experiences and principles and to formulate positive views on civil and religious liberty, separation of church and state, voluntaryism, and constitutionalism. His formulation of these positions was influenced by his Irish experience and intensified by the Enlightenment philosophies as they were represented in the works of Arthur O’Leary, Daniel O’Connell, and other leading Irish thinkers of the day. Although his mentality was partially shaped by the longstanding hostility to the British government, England’s political philosophy developed as a means of preserving Irish traditions. Although the development of his position on these subjects was conditioned by his historical experience, the truths themselves were accepted as intrinsically human and Christian. Even though England did not perceive these principles as absolutely applicable in every historical circumstance, he did see them as ideals to be realized wherever practically possible.

Third, and more specifically, England’s ecclesiastical experiences and his theological conception of the church also prepared him for American Catholic life. His political experiences and ideology influenced the way he viewed the ecclesiastical community. For him, the church, like the political community, was ruled on the basis of a constitution. Because of his constitutional approach to the church, he believed in a strong local church that had laws, customs, and characteristics peculiar to the national political and social circumstances. The church was like a court of law in which the bishops, like judges, were the ultimate source of decision; the witnesses were the Scriptures, the tradition, church laws, and the living testimony of the priests and people. The church, therefore, was the entire people working together for a common end, on the temporal as well as the spiritual level. Thus, England’s democratic experiences in the political reform movements and his constitutional view of ecclesiastical powers and duties blended to produce a collegial understanding of the church.