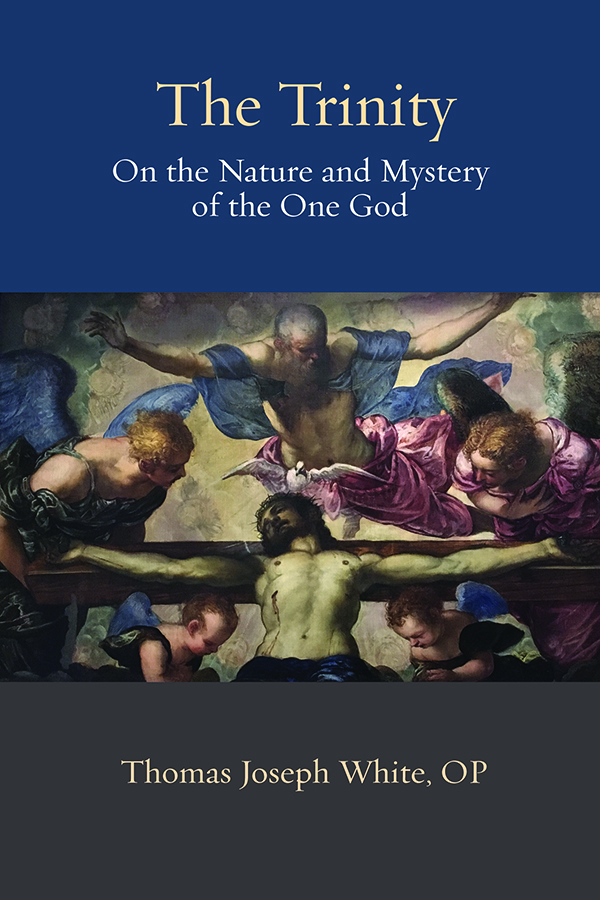 We were thrilled to talk to Thomas Joseph White, OP, to celebrate the release of his newest book, The Trinity: On the Nature and Mystery of the One God. Fr. Thomas Joseph is the Rector of the Angelicum at Rome and the author of several books, including The Light of Christ: An Introduction to Catholicism (CUA Press, 2017) and The Incarnate Lord: A Thomistic Study in Christology (CUA Press, 2017).

Q. While The Trinity hinges on Thomas Aquinas’s contributions to Trinitarian theology, you bring modern theological schools into the conversation as well. What was it like dialoguing the Thomistic and modern lines of thinking? How they differ in focus when in comes to the topic of the Trinity?

It could be a mistake for people who study the theology of Thomas Aquinas to think of themselves as outside the landscape of modernity. Aquinas actually refers to himself as a modern person because he takes it that he comes after the ancient and patristic period. He wishes to interpret the world in light of “modern” Aristotelian sciences. In many ways, his thought anticipates Enlightenment concerns about the domain of nature and the causal analysis of the world proper to the philosophical disciplines, in their distinctness from theology and revelation. It’s also the case that there’s a renewal of the study of St. Thomas in the modern world that’s specifically suited to the concerns of our era, initiated especially by Pope Leo XIII, but continuing in many contemporary modalities. This book grows out of that kind of sensibility. How do we think about our modern philosophical options in light of the contribution of St. Thomas, and how can they make an impact on our thinking about God and the mystery of the Trinity?

My own consideration in this work has to do in part with the question of whether we can think, in some genuine, albeit analogical way, about the nature of God itself and about the eternal processional life of the Trinity so as to consider the eternal Word and Logos of God as distinct from the Father and from the Holy Spirit of Love. Today I think we have to do this against the backdrop of other options that have had great influence, such as the vision of Hegel, who posits a kind of processional life of knowledge and loving God. But this is one that also is imminent to history and in which God himself develops through history. There’s also the famous protest of Karl Barth against any idea of natural philosophical knowledge of God interior to the life of theology. So I’m considering ways to place the thinking of St. Thomas in dialogue with these options without rejecting all the intuitions or proposals that stem from these other traditions, but while also offering a consistently Thomistic alternative.

One of the main considerations comes down to this: how do the human actions of Jesus reveal the divine persons and the life of the Trinity? How is our study of the Trinity related to our study of Christ and the mysteries of the Life of Christ? In this book, I posit an analogy between the human activity of Jesus as well as the human passivity of suffering in Jesus on the one hand and the inner life of God on the other where one has to accept a great deal of dissimilitude as well as similitude so that the human life of God truly reveals the inner life of the trinitarian persons but also in some sense veils or conceals that life from us.

Q. What do you think is the significance in Christianity’s foundational beliefs often being “mysteries”?

The notion of mystery designates something revealed by God, which is not infra-intelligible but superintelligible. In short, what is mysterious can be known partially but also remains opaque or hidden due to its transcendent numinousness. It is more richly intelligible than merely natural objects of knowledge, but for that reason, it can be studied and pondered in greater depths than natural topics of understanding.

Q. How did the writing process for The Trinity differ from that of your last CUA Press book, The Light of Christ, which was a holistic overview of the faith, literally “An Introduction to Catholicism”? What unique rewards or challenges did they present?

The Light of Christ is a book that presents fundamental Catholic claims to people who have only an initial philosophical or theological formation. It’s a challenging book, but it’s meant to be accessible to non-specialists.

This book also begins from that vantage point. It has a lot that is initial or that provides orientation to a person who’s trying to understand for the first time, for example, the arguments for the existence of God or the notion of God’s eternity or omnipotence. Some of the material on the Trinity is very introductory so that a person can get a first glimpse of the theology of God as Father, God as Son, or the notion of the Holy Spirit as the mutual love of the Father and the Son. At the same time, in this book there’s a much more speculative amplitude and a richer historical theory about the Trinity in particular. I look at some of the diverse theories about the Trinity in the high Middle ages, especially those that emanate from Franciscan circles as contrasted with those that emanate from Dominican circles. Taking these theories forward in time, I consider ways that elements of them are maintained or not maintained in modern theology after Kant and Hegel. Then I offer some creative proposals for ways St. Thomas’s theology can be received in a contemporary context, presenting his trinitarian ideas and his Christological ideas in conversation with the famous proposals of Rahner, Barth, von Balthasar, and others. What emerges is an original Thomistic proposal of a way to restate Trinitarian theology in our contemporary context. This is likely to interest people in academic theology as well as philosophers who are interested in medieval philosophy and its applicability today. It’s also a book that’s bound to be controversial, but I trust it will be so in a constructive way. Most of all, I hope it will help people think about God more deeply and that it will contribute to the intellectual and spiritual life of the Catholic Church and the life of Christian culture.

Click here to listen to Fr. Thomas Joseph’s recent lecture on Why the Trinity Matters as a part of the Angelicum Thomistic Institute’s Angelicum Professor Series.