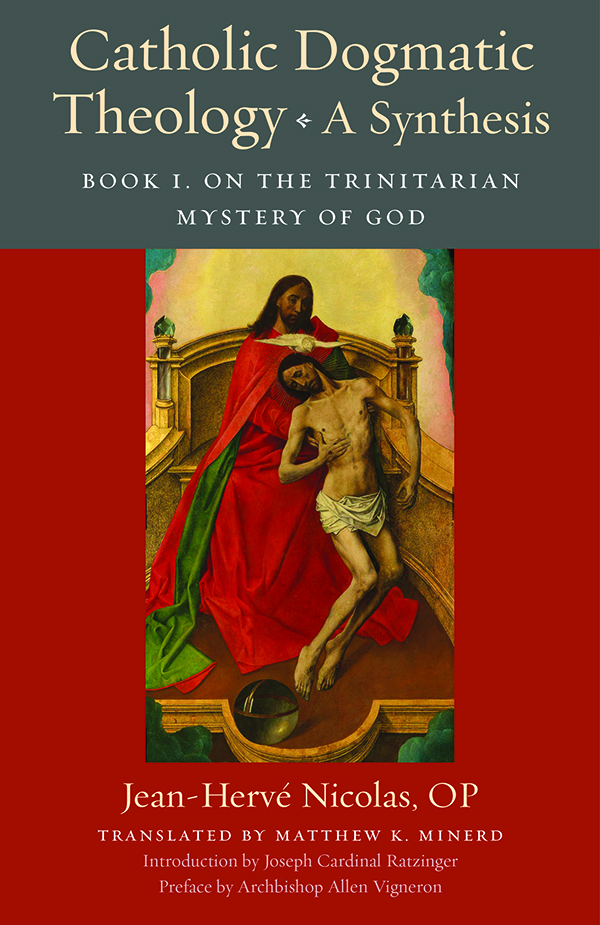 We were delighted to interview Matthew Minerd about his most recent translations of Jean-Herve Nicolas‘s Catholic Dogmatic Theology: A Synthesis and Ambroise Gardeil’s The True Christian Life. Matthew Minerd is a professor of philosophy and moral theology at Byzantine Catholic Seminary.

Q: What is one thing you would want readers to understand about Fr. Gardeil before going into The True Christian Life?

A: Fr. Gardeil is a great example of one of those forgotten figures of the past whose reverberations were, in fact, immense. His works are not found in contemporary mainstream editions in French, and only several small volumes have survived into contemporary English publication. In fact, even the latter publications were only quite recent in coming to market again. However, his works in theological methodology and spiritual theology were at the heart of two of the great debates of the first half of francophone twentieth century theology: the nature of supernatural faith and its relationship to theological methodology (in face of the Modernist crisis and the reform of seminary curricula); and the nature of the Christian life and the reform of moral and spiritual theology in the Thomist tradition. His thought was at once traditional and yet powerfully synthetic, thus making him dear to both conservatives and more progressives alike. In order to understand critical aspects of the Second Vatican Council’s discussion of revelation, the universal call to holiness, and the reform of moral theology, an appreciation of Gardeil is uniquely illuminating. Blessedly, also, his own breadth of mind helps to transcend some of the facile oppositions established in more polemical writings today.

Q: How would you describe Fr. Gardeil’s writing style, and how did you strive to convey that in English?

A: Fr. Gardeil’s style straddles the technical and the rhetorical. In the end, The True Christian Life secretly deploys, under often-soaring rhetoric, the great central motifs of Thomistic moral theology. Rendering Fr. Gardeil was a lengthy process of editing, reconsidering, rewriting, and above all literally “listening” to his text. Although the original chapters were not written for preaching, they are marked with the oratory of the pulpit, at times reminding one almost of the sweeping heights of a Henri-Dominic Lacordaire or the great preaching on morality by Marie-Albert Janvier.

Some readers might know of my translations of works by Fr. Reginald Garrigou-Lagrange. At times, he too can take off into rhetoric, but very often, the works I have translated by him were technical in nature. Thus, in translating him, one forever feels somewhat shackled by the needs of technicality. Something similar might be said for my work on Fr. Nicolas (though his style is not quite the same as Fr. Garrigou-Lagrange’s): one can only be so “chatty” when talking about “notional acts”, the nature of relation as applied to the Trinity, the communication of idioms, sacramental causality, and so forth.

Fr. Gardeil’s text, however, afforded me the opportunity to express true scholastic technicality in a rhetoric which just had to also have a beautiful ring in English. Rarely could I excuse myself on behalf of “scholastic technicality”! This was at once thrilling and arduous—like running up a long mountain path. I assure the reader: this exertion was well worth it. In this text, you’ll find some passages that ring in your ears. I suggest that you spend time meditating with them like the monks of old: on your lips so that the words might slowly sink into the depths of your heart and soul! His first small essay, in particular, is one “rhetorical home run” after another.

Q: You are also translating the multi-part work, Catholic Dogmatic Theology: A Synthesis by Fr. Jean-Herve Nicolas. What is unique and important about Fr. Nicolas’s work compared to other theology textbooks?

A: Fr. Nicolas’s work is quite marvelous on three heads.

First of all, it represents a wonderful marriage of the nova and the vetera, the old and the new. His own formation was pre-Conciliar and marked by the firm “ballast” of the old schola Thomae and the best of the inheritance of Latin theology up to the 20th century. Many new questions arose after the time of the “golden age” of Scholasticism, and the various scholae attempted to answer them. (Note well, however, that for the Christian, there is really but one “golden age”: the inaugurated eschatological age of Christ, in which we live our vocations today, faced with our world today. With the passing of my years on this mortal coil, I come more and more to dislike the smell of mere antiquarianism.)

After the Council, a lot of this was unfortunately just considered “passé” and the “decadent” decline of scholasticism, whereas it was really a chiaroscuro of illumination and shadow. But, Fr. Nicolas really was not limited to regurgitating the work of the old schola Thomae. He intensively engaged with the great themes of the period of the Second Vatican Council and the time following thereafter. Here, we see the nova, as he interacts with the immense theological literature of those years. Like a truly good teacher, he provides an example for the faithful theologian to learn how to engage “the literature” without becoming a mere creature of the latter, which, if I might slightly alter a line from Fr. Garrigou-Lagrange, contains many themes that might be in the vogue today but will no longer be spoken of by anyone in perhaps fifty years’ time.

This is connected to the second admirable characteristic of this work: its unified nature. He is not a high-modern rationalist, deducing everything, more geometrico, from a single principle. However, he presents the interconnection of dogmas in a unified manner, within a single framework, with all the balance that come from the centuries of theological tradition that precedes him. Rather than addressing, ad hoc, particular issues, he presents a single formation in the dogmatic themes of Trinitarian theology, Christology, Mariology, Ecclesiology, and Sacramental Theology. He does not say everything, but he does present a formation concerning the whole of dogmatic theology. Any good formation requires this kind of basic “map” of the great themes of Dogma and their interconnection. The readers of E. F. Schumacher know the importance of such “maps” for forming the habitus of any discipline. Although it would have been good to have explicit connections to moral and spiritual theology (which are not truly distinct from “dogmatic theology,” an ill-begotten categorization dating from the modern era), Fr. Nicolas at least takes pains to connect the great themes of dogma to our life of theosis/divinization. I suppose we will need to hope that someone works on his Les Profondeurs de la grâce, Contemplation et vie contemplative, and Dieu connu comme inconnu.

Finally, the work is the fruit of long labors. It represents many reiterations of teaching, thus containing a crystalline account of his pedagogical efforts. The interested reader can dive into his various articles and other books, cited throughout the text. However, Catholic Dogmatic Theology provides this lovely testimony to decades of pedagogical refinement, stamped by that simplicity which  is the hallmark of wisdom.

Q: What were the most enjoyable and/or difficult parts of these translation projects?

A: Translating Fr. Nicolas was like sitting at the feed of a great master, learning how to cut through the brush of so many topics. Just as I have felt in my work on Fr. Reginald Garrigou-Lagrange, I feel that I have been blessed with a profoundly edifying education right in the midst of my translational labors. In the case of Fr. Gardeil’s work, I was in the presence of a giant of spiritual theology, putting in order so many of my ideas about the moral and spiritual life.

By far, the most difficult thing for these two projects was figuring out how to deal with Fr. Nicolas’ style. The massive work is written in two volumes, though we will be publishing it in four. The first French volume often goes back and forth between a style that is marked by its derivation from his teaching notes, though, all the sudden, you feel his own writing style pressing in upon this framework. The second volume (our fourth) is much more in his own “written voice”—which can be at once rhetorically beautiful and yet also dizzying. He does not hesitate at all to fall into sentences that are over one-hundred, sometimes one-hundred-and-fifty (or more!), words long. Throughout the process of working on these volumes, which are meant to be accessible, I needed to learn how to make many choices that sail between the scholarly Scylla and a more colloquial Charybdis.

Also, as an Eastern Catholic, one cannot translate works like this without feeling the way that even very good Latin theology will be caught up in its own language and approach to things. But, one can also say the same thing about the East too, for humans all too readily slip into local dialects! Profound theology can overcome this and be marked with an openness and geniality that can soar above the limits of finitude. Fr. Nicolas, on this head, succeeds many times over! And, indeed, Fr. Gardeil so succeeds at this that even my seminary students—who almost always at least start their relationship with me by suspecting me to be a “Latinizer”, given my academic work—find his opening essay on divinization to be refreshingly in harmony with our own themes in the Byzantine East.