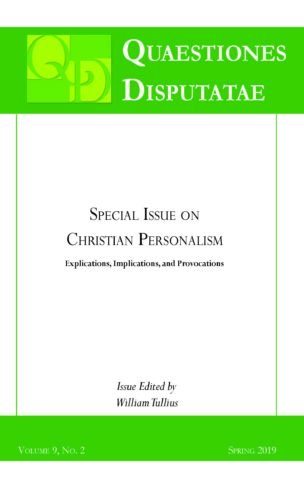 Quaestiones Disputatae is a journal of philosophy inspired by the medieval dialectical form of the “disputed question:” a method of philosophical discussion aimed at addressing the relevant issues of the time. Recognizing that significant philosophical contributions are found among philosophers of various backgrounds and outlooks, the journal is, therefore, not limited to a particular period of philosophy, nor is it representative of a specific philosophic school or point of view.

Each issue will have a special theme. An issue may focus on a topic in a particular area of philosophy, such as logic, philosophy of science, political philosophy, or aesthetics; on the work of a significant philosopher such as Proclus, Duns Scotus, or Husserl; on the examination and study of an important text of philosophy such as the Enneads of Plotinus, or Formalism in Ethics and Non-Formal Ethics of Values by Max Scheler; or on the valuable contributions of a particular philosophical school or movement such as Cambridge Platonism, Scottish Realism, or Paduan Aristotelianism.

Quaestiones Disputatae aims then at a genuine philosophia perennis that respects the tradition of philosophy but also recognizes philosophy to be a dynamic and progressive discipline, one that is more than its history. In this way, it can be a forum for philosophers to discuss and share their work, and to participate in a meaningful dialogue with others.

Direct submissions and editorial inquiries to: