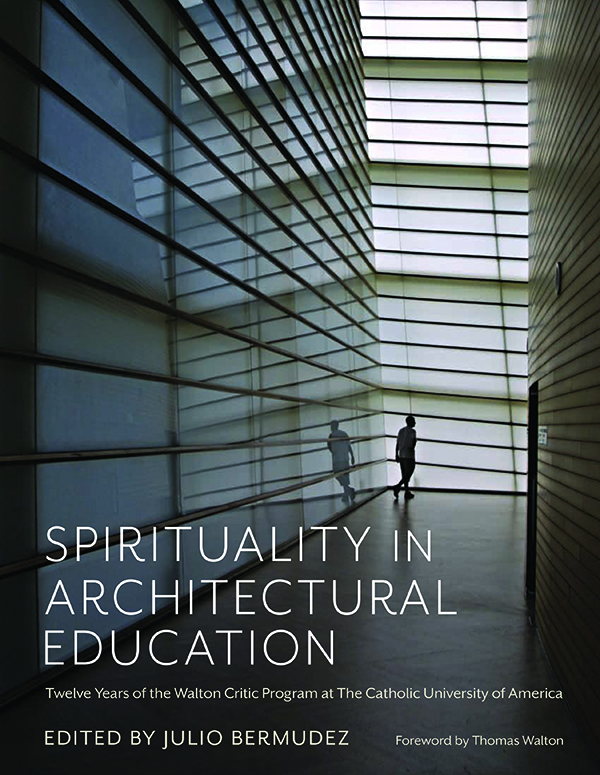 Reflections on Spirituality in Architectural Education

At first, addressing spirituality in architectural education appears as a daunting effort. In fact, the more we think about it, the more the task seems doomed to failure. At the same time, paradoxically, deep down, we intuit that the job could not be that hard. After all, any good architect and educator will tell us that the plight of architecture is barely realized when a building guarantees the (legally required) health, safety, and welfare of its users. And, they will quickly add that the promise of architecture begins fulfillment when such expectations have been met and transcended by inviting experiences, instilling values, and offering services fulfilling (if not exceeding) our highest aesthetic, ethical, cultural, technical, existential, and/or social longing and needs. And this is, of course, impossible unless the architect engages the most profound and meaningful dimensions upon which design, thought, and practice find their ethos: the spiritual realm. How else can we explain why the inspiring dialogues of Louis Kahn and his students, as well as his thinking, remain a source of spiritual wonder if not a central part of our discipline’s lore. And there are a few other examples, such as the living legacy of John Hejduk’s teachings at Cooper Union or the influential words that Juhani Pallasmaa continues to share with the world. Who hasn’t heard architectural professionals or academics refer to the ineffable and immeasurable during design studio reviews —allusions that indisputably refer to some type of transcendent realm or dimension?

Yet, there is a “loud” silence in the architectural discipline regarding spirituality. At least officially (i.e., in the published record), neither academics nor practitioners are too eager to discuss the matter.  Does this uneasiness have to do with the word “spirituality” and what it stands for? For the record, in my book, spirituality is defined as an awareness, worldview, or way of being that responds to and expresses: (1) a realm or entity beyond the understanding and control of individual and socio-cultural consciousness; (2) fundamental connectedness with others, nature, or divinity; and (3) helping other living beings. In other words, spirituality is seen as offering a big picture that puts life, society, and the world in their proper place.

The misgivings that most in the discipline have about spirituality have to do with its dangerous side: a tendency to devolve into an “existentialization” of religion, cultish devotion, misplaced desire, and projections, or other expressions that cheapen or betray its transcendent and all-encompassing nature. As I articulate in the book, these dangers are real but they may and need to be overcome in order to offer a more comprehensive, mature, and compassionate architectural education and practice. Indeed, spirituality is particularly relevant and urgent when we consider the high responsibility associated with the inevitable building boom to occur in the coming decades and that tomorrow’s architects are our students today.

Given the conditions of architectural practice today, architecture schools appear better positioned to develop a mutually reinforcing relationship between architecture and spirituality. The architectural academy would thus recruit another reason to take on spirituality beyond (1) improving the limited and limiting cognicentric-instrumental teaching model presently utilized and (2) preparing future citizen-architects for dealing with an ever-more challenging world. Why not use spirituality-informed professional training as the platform to investigate and develop ideas, methods, and knowledge that advance such architectural vision? Attending to these three goals in no way would diminish the quality of architectural education, only enhance and make it more meaningful, thus taking care of the responsibility that schools of architecture have with the profession, the public, earth, and, for those with faith, God.

I will close these considerations with a reflection inspired by this 100-150 years-old adage:

Education is what remains after one has forgotten what one has learned in school.

There is something mystical in this statement that resonates with a spirituality-minded architectural education. It is telling us that the instrumental reasons for going to college are not the point. But, if education is not what can be remembered (i.e., information, knowledge), then what is it about? A pointer is found in a distinction between knowing as “sapere” (learning by acquaintance, first-person knowing) and knowing as “cognoscere” (learning at a distance, third-person knowing) that the Romance languages (and not English) allow us to make. Whatever has been learned indirectly is the first to go because it remains attached through weak links. “Sapere-knowing,” on the other hand, establishes deep roots and an extensive network of connections that makes the gained knowledge inalienably ours. “Sapere” is so much part of our being, so “us,” that it cannot be forgotten. Yet, “sapere” becomes hard, if not impossible, to describe consciously or verbally. And it is this tacit nature of “personal knowledge,” as polymath Michael Polanyi calls it, that reveals what remains when all that was taught is forgotten. If we meditate on this, we soon realize that “sapere” makes any distinction between knowledge and being untenable. We are transformed by what we come to know, and the knowledge gets shaped by who we are. In other words, there is an intimate dance between being and knowledge taking place (in which others, the context, and more have an influence). Learning is the result of such dance, and, when performed enough times in the right way, it turns into development. To put it differently, education is an epistemologically and ontologically transformative process.

Today’s cognicentric, utilitarian, and fragmented education leads us away from what the adage points at. While we may need some of that teaching, we cannot accept that it is all that higher and architectural education has to offer. Hence my call for a spirituality-minded education, one that expands and transcends the existing learning paradigm. We want an education that skillfully and compassionately arranges the conditions for knowledge and being to meet and transform one another.

We aspire for an education that seeks to occasion transformations so structural, profound, intimate, and thorough that learners cannot tell what they have learned because it has become one with them. In other words, we envision an education in pursuit of the “ineffable” that frees learners and encourages them to become ever more themselves by gaining “sapere-knowledge” that cannot be forgotten. We want an education that is emancipatory for all and with spirituality at its heart.