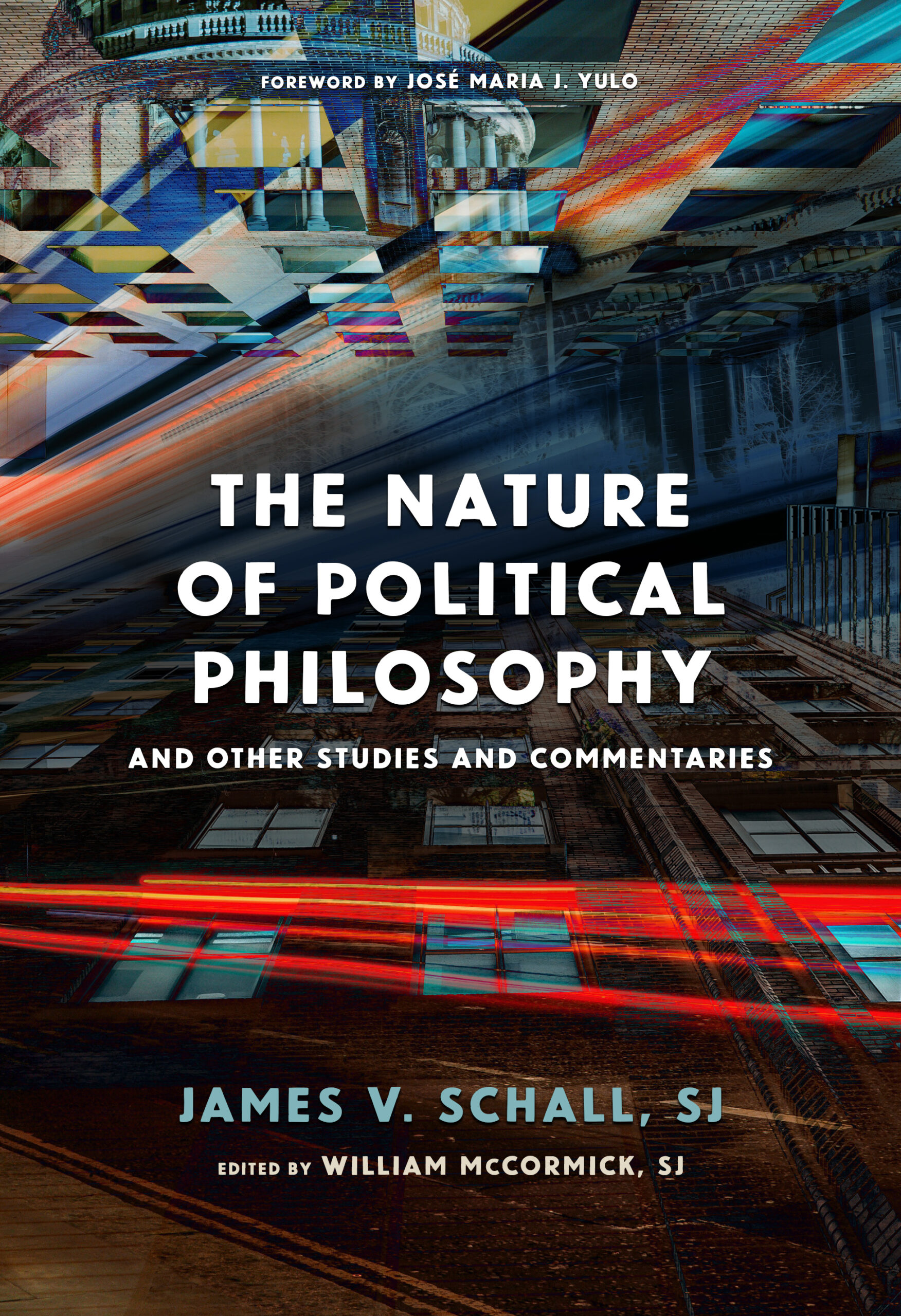 The following is an excerpt from The Nature of Political Philosophy: And Other Studies and Commentaries by James V. Schall, SJ and edited by William McCormick, SJ (CUA Press, 2022). James V. Schall, SJ, (1928-2019) was an American Jesuit Roman Catholic priest, teacher, writer, and philosopher. William McCormick, SJ, is assistant professor of political science at St. Louis University and the author of The Christian Structure of Politics: On the De Regno of Thomas Aquinas (CUA Press, 2022).

The end of the theoretic sciences is a good which lies outside the sphere of the human will; the truth of the theoretic (speculative) intellect. The contemplative life, most perfectly ordained to this intelligible good, is the life to which the political virtues and the arts themselves are ordered.

“Catholic social thought” is that body of official reflection—theological, philosophical, political, economic, social, familial—that has been presented as authoritative by bishops, the papacy, and national episcopal conferences. It is designed to give a reasoned explanation and justification of the Church’s understanding of the public order and human life within it. Its sources are reason, tradition, Scripture, and experience. Political philosophy inquires about the place of the transcendent within the city. Though the two ought to be aware of each other, the object and the immediate sources of each are different and need to be distinguished. Philosophy strives to make distinc­tions clear so that we can know and speak accurately about what is. This knowing and speaking is what the mind is “for.”

Catholic social thought is not exclusively a discipline of human origins. While upholding reason and recognizing its scope, it acknowledges and benefits from the information and inspiration found in revelation. It sees this source as a valid guide to understand the human enterprise. The present chapter concerns the way reason and revelation relate to each other in a noncontradictory manner. In this sense, it points to the “natural” end of what is implicit in political philosophy—namely, that its completion is not in philosophy itself. But philosophy enables us to see why a transcendent end is feasible. Charles N. R. McCoy made this point in the introductory quotation about the good that lies outside the will, not created by the will. To understand this relationship of political philosophy, philosophy, and rev­elation, one must begin with the contemplation “for its own sake” that is philosophy. Philosophy seeks a knowledge of the whole; yet the whole escapes it. This very escaping is the central problem of all of philosophy, the quest for the truth of things. It is likewise the reason why philosophy cannot exclude revelation and remain itself coherent. It cannot logically claim to be open to the whole while deliberately excluding something recurrent within the whole.

Man is by nature a “political animal,” as Aristotle explained at the begin­ning of his Politics.1 But each human being is a “whole.”2 He is primarily created for what transcends the city, for eternal life. Transcending the city does not mean bypassing it or denying it. The two ends of man—the polit­ical and the transcendent—are, in principle, compatible with each other. They have a common origin. They can diverge from their respective ends, however, because of free will, itself natural to what it is to be a human being. No rational being can achieve its end apart from its own knowing, choosing, and accepting it as given, as gift. The inner life of the human person as it is related to others, including the origin of being, is the locus of the primary “action” in the universe. This is the action wherein what is and what is not of God are decided. The universe exists in the first place in order that the drama and story of free persons be carried out in time. There is no collective inner-worldly entity that gathers together all human beings. The creation of such an entity is not the purpose of the existence of man in this world.

An incident in the New Testament illustrates these points. The rich young man can be compared and contrasted with the young potential phi­losophers that populate Plato’s dialogues. The rich young man, on consid­ering what Christ requested of him, decided not to accept the invitation. No indication in the text suggests that he was not intelligent enough to know what was at stake—just the opposite. Subsequently we read—in memorable, even poignant, words—that, after his decision, he “went away sad” (Matthew 19:22). He did not take the nobler alternative to which he was invited. Most modern thought on the same subject would consider that actually embarking on the “higher road” offered to the rich young man was equivalent to reject­ing man’s autonomous and unlimited freedom. In this hypothesis, he should have gone away elated. He chose to be “his own man,” as it were.

The rich young man, of course, was not, as in Plato, encouraged to become a philosopher or a politician. He was simply invited to sell what he possessed and follow Christ. The life that he was leading did not seem to be intrinsically disordered or evil. Still, we are made conscious that a conflict can exist between the good and the very good. This conflict resides in the order of rational freedom, of greater and lesser goods and abilities. We find no sign that, because of his choice not to follow Christ, the young man somehow lost his soul. He lost something, no doubt; and he could have lost his soul, but probably he didn’t. Nevertheless, something greater that might have existed seems to have been lost by his choice to go away. Otherwise, he would not have been invited in the first place.