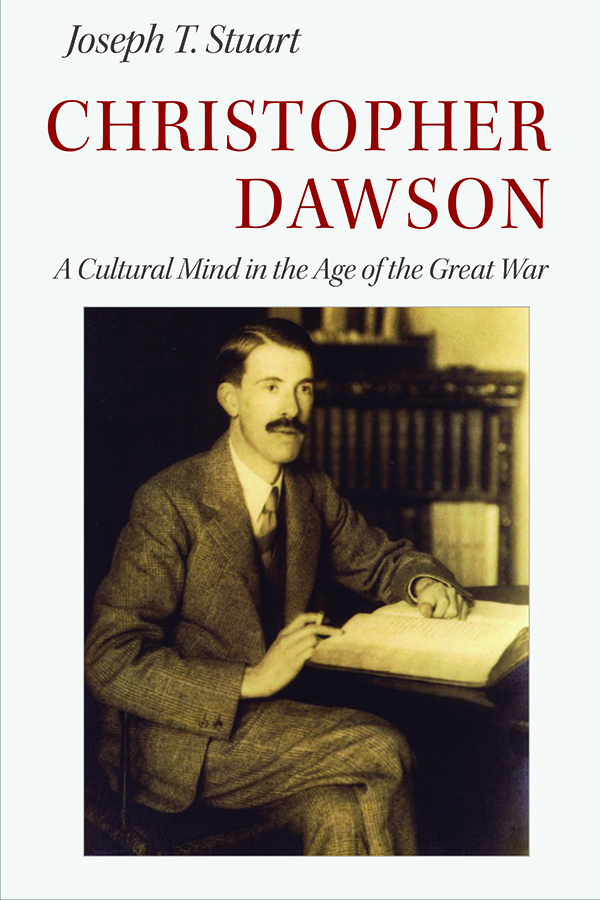 We were so glad we got to talk to Joseph T. Stuart about his newest book, Christopher Dawson: A Cultural Mind in the Age of the Great War (CUA Press, 2022). He serves as program chair of history and as a Fellow of Catholic Studies at the University of Mary.

Q: How has studying Dawson’s life changed how you approach discourse around culture and history?

A: It has transformed it! Dawson’s work is so rich and broad. Let me start with a basic observation: culture is incredibly important for human formation and happiness because through it, people adapt to their environments (or not). It conveys competence to the rising generation in how to interact with other people, how to eat well, how to work, who is God, etc. So a crisis of culture like what happened in the Age of the Great War (and is happening today too, in many ways) is a serious matter. We need to ask ourselves: what cultural influences right now shape the way we live and think? As my mentor James Gaston wrote in Laywitness in 2012, “A proper understanding of culture is necessary for a more complete appreciation of the past, a sound assessment of the present, and prudent planning for the future.”

What is a proper understanding of culture? Social scientists are inconsistent. Some define it externally in terms of human behavior, others internally in terms of values. Dawson combined these. Culture is a common way of life. It is a community of ideas/beliefs (I), of folkways (F), and of workways (W) in a community of place (P)—or I/FWP for short. Each side of culture affects the others.

Sociologists like Margaret Archer have commented on the lack of analytical terms for designating the components of culture. Yet Dawson’s approach to culture with I/FWP provides those terms. They help to coordinate research in terms of the big picture. These elements of culture prevent scholars from neglecting important data sets or spiritual influences.

Culture is not only a comparative object of knowledge which we approach in a detached manner, it is also a sphere of rival loves in which we are forced to take sides on what it means to be human. Religion shapes culture, and without enculturation into a religious vision, the common way of life drifts toward other gods or materialistic ideologies. History is the record of cultural dramas! This has all profoundly shaped my life as a scholar. I hoped to show what a twenty-first century “Dawsonian” approach to history and culture is like in my first book, Rethinking the Enlightenment: Faith in the Age of Reason (2020).

Q: Why is it important today to acquire “cultural minds” like Dawson?

A: Dawson attempted to see things whole. In this way, he responded to the aftermath of the Great War (1914-1918), which fragmentated culture, by applying in the social sciences John Henry Newman’s “philosophical habit” of mind: the “power of viewing many things at once as one whole” and their interrelations.

As isolated bits and pieces of culture floated along after the guns fell silent in 1918, leaders and whole societies struggled to keep from drowning, grabbing onto whatever they could reach. They tended to simplify their problems in terms of those isolated pieces, proposing one-sided solutions—such as at Versailles in 1919 or in Germany in 1933. Such simplification led to ideological constructions of reality and the creation of new problems. Having cultural minds like Dawson’s would enable us to instill wisdom and avoid other simplifications in our own time like we saw in response to the COVID pandemic.

Q: In the book, you discuss Dawson’s four rules for knowledge integration: intellectual architecture, boundary thinking, intellectual asceticism, and intellectual bridges. Which of these techniques do you find to be the most interesting or challenging, and why?

A: Discovering certain patterns to Dawson’s thought alerted me to a logic or way of thinking beneath the surface of his texts. The four rules of his interdisciplinary logic can be abstracted out of his context and made useful today. Quentin Skinner, former Regius Professor of History at Cambridge, described how intellectual history could be an exciting “dialogue between philosophical analysis and historical evidence.” That’s it!

Dawson used “intellectual architecture” to build up mental structures to classify and locate new knowledge and relate it back to the whole. “Boundary thinking” emerged out of his childhood at Hay-on-Wye on the boundary between England and Wales, pointing to his later interest in cultural and disciplinary boundaries. Dawson used “intellectual bridges” to connect seemingly divergent things together—like “Left” and “Right” in his editorial policy at The Dublin Review during the early 1940s. Dawson’s “intellectual asceticism” connected factual fastidiousness, ideological restraint, and English reserve to clear writing.

In my own intellectual life, I probably reference boundary thinking most often because we so often fail to make basic distinctions in our world today, as between empirical and philosophical methods or between the faith and the proper autonomy of the natural order. Boundary thinking is difficult to practice consistently due to our longing for religious or ideological integration, but Dawson showed a way.

Q: What was the greatest surprise or challenge you came across while writing this book?

A: At first, I had no idea how to proceed. I knew I did not want to write a biography or simply summarize Dawson’s ideas. Eventually, this book emerged as a biographical study of what Dawson was doing through his life and work in response to the world around him. Dawson’s cultural mind became a window for me into a wider mental world in the Age of the Great War, which immediately precedes our own times. I was able to range far and wide across the intellectual history of the twentieth century, from the social sciences and historiography to political religion and education. What an adventure!

You can also listen to a lecture by Stuart about Christopher Dawson on YouTube here.