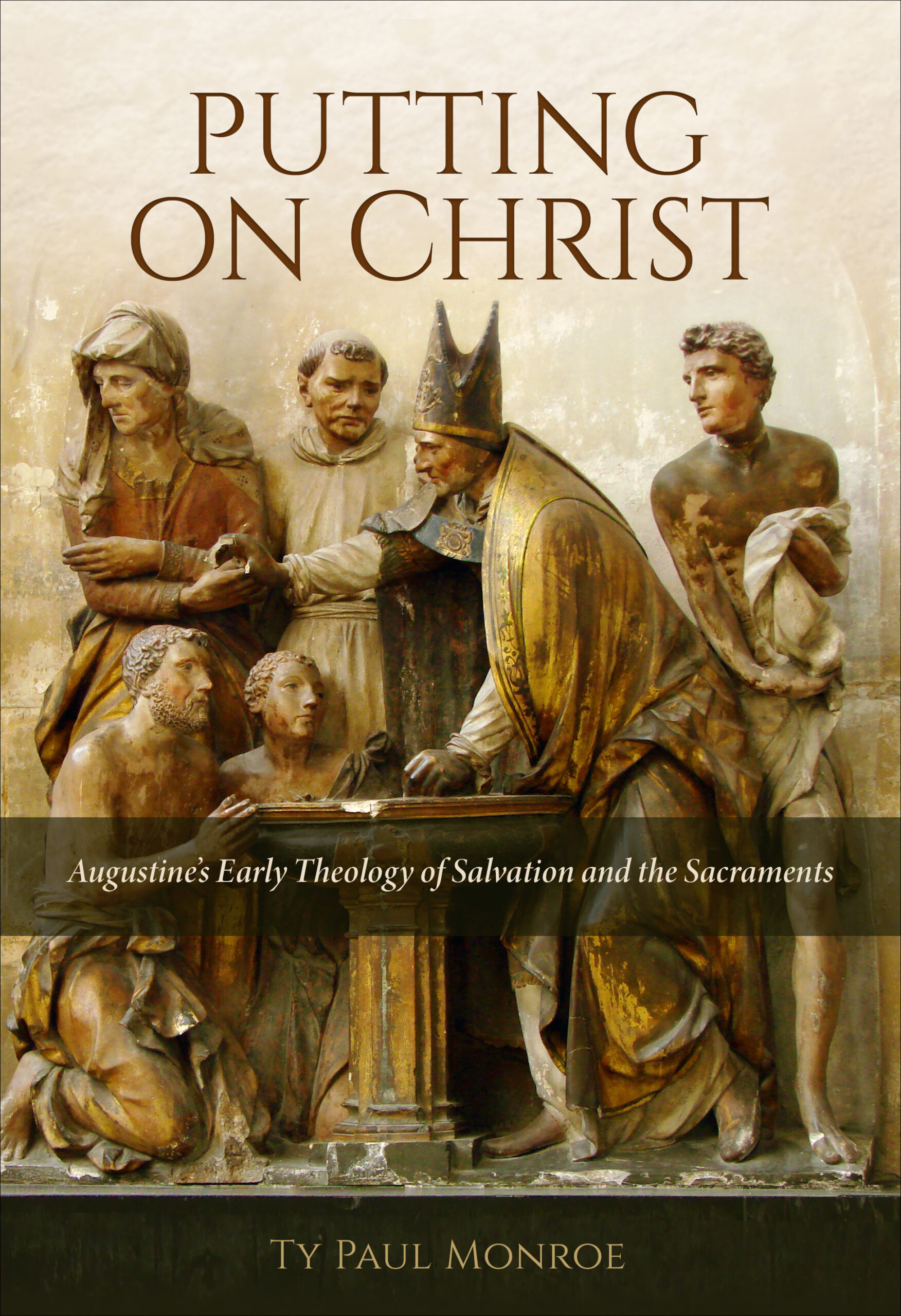 We were so very glad to get to talk to Ty Paul Monroe about his upcoming book, Putting on Christ: Augustine’s Early Theology of Salvation and the Sacraments (CUA Press, 2022). He is an assistant professor of theology at Assumption University.

Q: What drew you to focus more on Augustine’s early life and writings as opposed to his later works as a more matured, refined theologian?

A: With any book, there are a number of contingencies that contribute to the project’s final form but which cannot be fully accounted for, even in hindsight! All of that hand-waving aside, I can identify a few things which drew me to working on the first decade and a half of Augustine’s long writing career (ca. 386 AD to his death in 430 AD). The first is that Augustine’s theology of humility has always resonated with the view of Christian discipleship that shaped me as a young person. Then, seeing that theology of salvation (or ‘soteriology’) expressed elegantly in Augustine’s Confessions, I came to realize toward the end of my master’s degree that I wanted to work on this aspect of Augustine’s thought in my doctoral research, in some form or another. After becoming more intimately acquainted with Augustine’s earlier writings and realizing that it took Augustine some time to ‘work out’ this theology of humilitas, I became fascinated by that question of development, of the complex nexus of ideas, experiences, and endeavors that shaped that process. Insofar as the developments I trace find their proximate terminus in the writing of Confessions (ca. 400 AD), this raises the final aspect of your question, and it’s one I struggle to answer. To be frank, I’m not entirely convinced that Augustine’s theological views became more “refined” as his pastoral and writing career advanced into the fifth century and as he waged more polemical battles. I do detect refinements and a process of maturing in the span of years my work treats; however, as I note at a few points in the book (sometimes only in the footnotes), I worry that in the later decades of his life Augustine’s view of grace, in conjunction with his eschatology, developed certain objectionable commitments (the seemingly necessary damnation of unbaptized infants, to name just one example). This was, I fear, especially the case as he worked tirelessly to combat every feature of a view which we now call Pelagianism. Augustine is a saint and his was a brilliant mind, but this doesn’t mean he was infallible. I think he would welcome thoughtful, critical engagement with his views—he says as much in some of his works! The challenge, then, is to continue to appreciate what I take to be the positive, even breath-taking aspects of Augustine’s understanding of God and of the human person called to find its rest God, while not being afraid to face up to aspects of his thought that perhaps require tempering, if not also outright correction.

Q: What can Catholics learn about the sacraments from studying Augustine? How has your understanding of them changed through studying him?

A: To continue with an idea I just aimed to express, I think among Augustine’s refinements in the early third of his writing career (ca. 386–400 AD) was his increased appreciation not only for the ‘graced’ character of creaturely existence, but also for the uniquely temporal, physical, and communal ways that humans come to be redeemed by that grace. It was during these years that he fully came to see the import of one of his favorite scripture verses, 1 Cor. 4:7 (“What do you have that you have not received?”). That growing appreciation went hand in hand with his deepened sense for just how important it was that the Mediator and Source of such grace be a genuinely human (and fully divine), embodied Savior. All of this, then, came to enrich his sacramental vision, since he came also to appreciate that Christ’s life, death, and resurrection communicated its own pattern and its saving power to other humans through a network of physical practices within a shared community. Augustine’s thinking has particularly contributed to my own deepened appreciation for the fact that a Catholic understanding of the sacraments always foregrounds both their ‘objective’ and ‘subjective’ aspects. That’s to say, in his best moments, Augustine persistently reminds us that the sacraments are in some sense objectively effective apart from or prior to us, the recipients, at least insofar as we don’t generate their saving grace. Yet he also shows why and how the sacraments are always brought to their full effect when we subjectively receive that grace and act on it in our lived experience (see Catechism of the Catholic Church §§1128 & 1131).

Q: Putting on Christ studies Augustine from many different angles and examines a sizable portion of his vast bibliography. How did you keep your ideas organized throughout the writing process?

A: I am trying not to chuckle while answering this question. There are some things I am fairly good at keeping neat and organized, like my office. However, I confess—in trademark Augustinian fashion(!)—that it was in part through writing this book that I developed somewhat more sensible research habits. But even this is a bit misleading, since that process still left me with countless Google Docs of frantic notes and even less coherent collections of fragments of material cut from previous draft chapters. Nor will I say I now have an impeccably streamlined process for current projects. In the end, my rocky road to completion entailed a combination of preserving every note or draft fragment that might possibly turn out to be useful and undertaking countless rounds of revision of my drafts, checking to see whether the broader argument truly made sense. I leave it to readers to judge to what extent I’ve succeeded!

Q: What surprised you most in researching and writing this book?

A: What surprised me the most when researching and writing the book was one of the early realizations I had about Augustine’s development. I came to see that although Augustine is (rightly) known to us as the theologian of humility par excellence, he only very rarely used this term in the first seven years of his writing career, and even then it did not carry the rich and complex meaning it would come to carry for him in years to come. Seven years might not seem like a long time, but for a writer as prolific as Augustine, this means there are a number of texts in which he is relatively silent about the concept of humility. I was also surprised to be able to watch him develop that rich and complex meaning over the following seven or so years, even as he worked through various other theological and pastoral concerns.