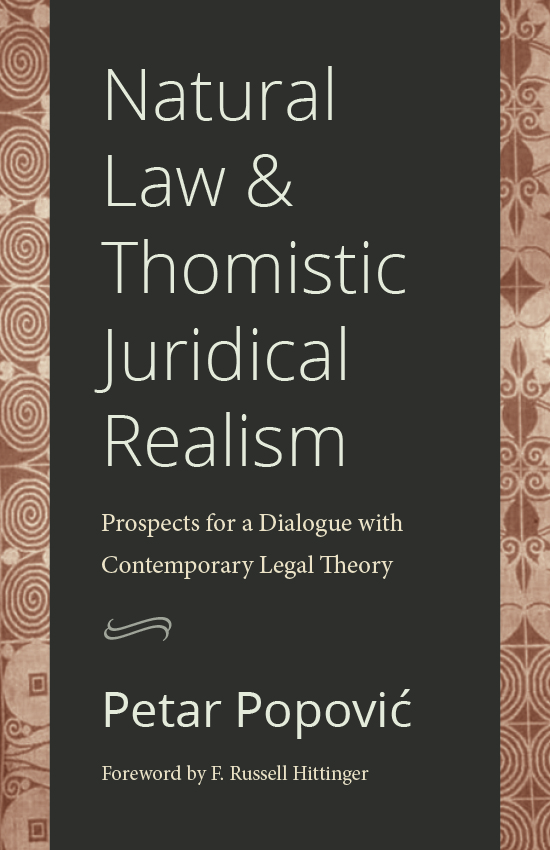 Petar Popović is adjunct professor of Canon Law at the Pontifical University of the Holy Cross, Rome, and most recently the author of Natural Law and Thomistic Juridical Realism: Prospects for a Dialogue with Contemporary Legal Theory (CUA Press, 2022).

In a recent Q&A on this blog, Fr. Thomas Joseph White said that “it could be a mistake for people who study the theology of Thomas Aquinas to think of themselves as outside the landscape of modernity”. The same claim holds for the scholars in the field of Aquinas’s legal philosophy. My recently published book Natural Law and Thomistic Juridical Realism is certainly meant to transcend the purely exegetical or, so to speak, “archeological” approach to Aquinas’s texts in legal theory. Hence the subtitle, Prospects for a Dialogue with Contemporary Legal Theory. Rather than wanting to put the legal-philosophical clock back to medieval times, the book explores the extent to which it is possible to hold that Aquinas’s elucidation of the legal phenomenon and of the legal status of natural law is in sync with comparable accounts of both the recent natural-law theorists and their contemporary critics.

The reader of the book will perhaps be surprised to find that Aquinas conceptualized the essence of the legal phenomenon (or what he calls ius) not as a legal norm (or the legal system) or as a subjective right, but as a thing, reality, or a state of affairs (which he calls res). Of course, in order to think of “law”, at the highest level of analysis, as something that is describable as a thing it is necessary to provide a perspective that, so to speak, justifies this approach and shows how this thing may be rendered juridical or legally relevant. For Aquinas, this perspective is provided by the virtue of justice, the definition of which he inherits from the Roman jurists: the constant and perpetual will to give to each person his own right. A thing becomes ius, it participates in the juridical phenomenon that is denoted by the term “law” in modern English, when it becomes the object of the relationships of justice (or, as he says, ipsa res iusta), that is, when it is attributed to certain persons as its titleholders, while at the same time being owed by other determinate persons as debtors on account of the possibility of their interference with that attribution.

The central aim of my book is to show some of the advantages of taking into consideration Aquinas’s account of the juridical phenomenon in contemporary legal (theoretical and practical) contexts. I show how Aquinas contributes to these contexts with a new way of conceptualizing the intersection between law and morality. This question, perhaps the hardest and certainly the most debated legal-philosophical question, is usually answered either by postulating a strong separability between law and morality (according to authors who subscribe to versions of legal positivism, such as H. L. A. Hart or Joseph Raz), or by assessing the ways in which moral values may be said to constrain the content of positive law (such is the case of natural lawyers like John Finnis, but also of his critic Henry B. Veatch, or of earlier natural lawyers, such as Jacques Maritain). Aquinas points to an alternative way of conceptualizing the law-morality intersection when he inquires into the conditions for identifying the juridical status of morality itself, namely, of natural law. In his view, juridicity is not introduced into human relations and communities only through human artifactual creation of positive legal norms, neither is morality juridicized exclusively by human positive law. Instead, Aquinas argues that the juridical domain is already operative whenever the other-directed and external virtue of justice is established between persons regarding certain things or states of affairs, even prior to positive law.

In addition, Aquinas is insistent in his claim that the things or states of affairs that constitute the objects of justice do indeed denote a distinct form of human good, which is not interchangeable with other forms of that good. This is what he calls the good of justice (bonum iustitiae) or the good that arises from the acts of “giving” things (in the broadest possible sense) to their titleholders or otherwise respecting the attribution of those things to determinate titleholders. This enables us to think of the legal phenomenon as a distinct form of human good that becomes truly intelligible only in the context of justice and the thing-centered “law” (ius) as its object. Moreover, according to Aquinas, ius is envisioned not primarily as “my” good, or something that is owed to me as my ius or my legally claimable thing, share, or state of affairs, but as the good of another person or an other-directed good. By fulfilling the virtue of justice through actions, each of us is contributing to the whole human good of other persons who are the titleholders of the thing that is the object of justice. In this way, Aquinas’s legal philosophy is highly congenial to various goods-based approaches to conceptualizing law.

As I analyzed the relevant Aquinas’s texts in which he elaborates on his understanding of lex (a rational order or norm) and ius (law at the highest level of analysis as the just thing itself) and the perspectives in which these two terms intersect, I relied also on the work of some recent authors who have previously contributed to a contemporary reading of Aquinas’s account of ius as the thing-centered justice-based phenomenon. The most prominent authors in this more recent tradition are Michel Villey and Javier Hervada. Each of them, in his own specific context and from the viewpoint of his own preferential emphases, offered a proposal on how to best understand Aquinas’s theory of law and rights. Just like Aquinas, these authors do not claim to have themselves arrived at the best possible account of law, but are aware that their respective readings of Aquinas belong to a certain tradition, which started with Aristotle, was subsequently inherited by the Roman jurists, and was then passed on to the modern and contemporary times in a Thomistic synthesis. This tradition is usually referred to as Thomistic juridical realism, precisely because of its rei-centric (or realistic) emphasis.

You can read more of Popović‘s essays on Academia.