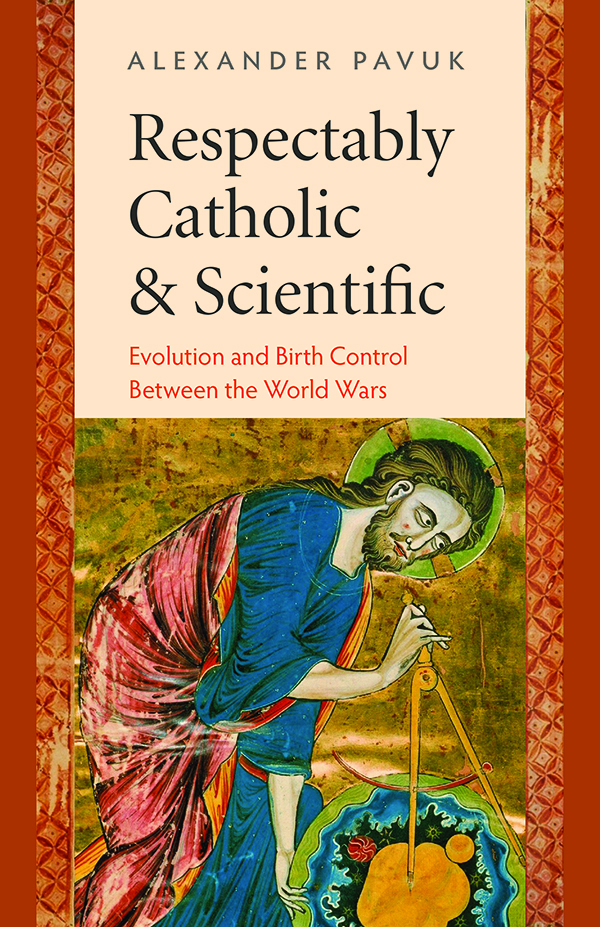 We were so excited to interview Alexander Pavuk about his most recent book, Respectably Catholic and Scientific: Evolution and Birth Control Between World Wars (CUA Press, 2021). Alex Pavuk is a professor of History and Geography at Morgan State University.

Q: Respectably Catholic and Scientific covers a very specific moment in the history of American Catholic discourse. What inspired you to write a book about it?

A: I’d say there were a few key questions that converged in my mind in the genesis of the project. But the one that really inspired me to write was something that has been floating around in my mind for years. In the broadest sense, what happens to the essence of concepts—especially religious ones—when outreach-minded thinkers try to present those concepts in wholly different idioms or vocabularies in an attempted appeal to audiences who wouldn’t otherwise give them a hearing? This book is sort of a case study for exploring this question in light of some early twentieth century American Catholic clergy with social science training. They really wanted to reach an American culture that was heavily invested in the public authority of science at the time.

What they did was take particular ideas about human origins and reproduction—ideas they saw as having theological, bioethical, and moral implications—then tried to influence the public conversations about the topics while restricting their arguments to utilitarian social and biological science frameworks.

The question in my mind that needed to be asked was not just whether they “succeeded” in their goals or not by getting their Catholic voices heard, and their positions engaged. It was moreso what “success” might have meant in the first place. In other words, what if they did get their voices heard but what they said and how it influenced the debates became something very different from what they intended?  Would they look back on it as success if, for example, they very ably defended the legitimacy of the rhythm method of birth prevention against opponents advocating artificial contraception but, in so doing, gave very effective justifications for separating sexual intercourse from possible procreation (against their own church’s stated positions on marriage, sexuality, and reproduction)?

In a more concrete vein, part of this book is about interesting pre-Vatican II starting points of trends and patterns commonly associated with the period during and after the Vatican II council.

Q: Did you dig up anything unexpected or surprising during the research phase?

A: Indeed, I found quite a few surprises. For one, the first birth control pill, called enovid, was co-invented by a physician researcher who considered himself a devout Catholic, Dr. John Rock. It was surprising to see that a number of the public arguments he made for the theological legitimacy of the pill were actually near-repetitions of arguments made by some of my book’s main figures in defense of the rhythm method back in the 1930s.

Q: What would you say is particularly relevant about the book for today?

A: Well, my first inclination would be to say that readers will likely be the best judge of that relevance; they will probably see things that didn’t occur to me.  That said, I do think there are quite a number of lines where this book connects to contemporary culture and to some big debates of our times. One such debate is about the place and purpose of scientific authority in broader culture—and how such authority is represented in the public sphere. We have all been going through a multi-year epidemic that’s brought this question to a near fever pitch of attention.

Other contemporary relevance is in how long standing, distinct religious institutions including, but certainly not limited to, Catholicism, are experiencing significant internal debates and divisions over how their theology, history, and practice should be marshalled to meet, or else change alongside, broader cultural mores and legal norms that are themselves in a state of rapid, significant flux. Part of this is a debate about discernment over what does or does not constitute, for want of a better term, secularization within religious groups. In the Roman Catholic example, one only has to look at the current disagreements over the approach of the present pope in comparison to his predecessor when engaging with the social debates to see a lot of internal conflict in global Catholic culture, some of it turning into debate over what is the essential nature of Christianity.

We’re seeing one of the biggest unfolding internal conflicts increasingly ramped up in Germany, a conflict some argue could develop and spread into a second Reformation, of sorts. It would be hard not to notice that a big part of the conflict centers precisely on sexuality and the relationship between sexuality and reproduction, even sexuality and potential sanctity. Questions about those connections are exactly what half of my book’s debates in the 1920s and 1930s centered on.

With respect to the relationship between science and religion-theology, the zombie-like “warfare myth,” i.e. the assertion that those realms necessarily conflict with each other, shows no signs of abating either in popular understanding or, indeed, in the minds of more than a few journalists. The book contributes to what have been decades’ worth of historians’ refutations of that conflict myth even as it helps reveal the differences between a conflict with science and a problem with scientism.

Another historical bugaboo that continues to pop up every few years is the Scopes Trial of 1925, particularly as tied to public representations of evolution. The book speaks to this constellation of issues not only by introducing a Catholic strand into a Scopes story that tends to be framed exclusively in light of Protestantism, but also by suggesting why the matter of eugenics has to be paid a lot more attention to in these topics. Eugenics has seen renewed scrutiny in our age, but some forget that in the trial’s era, popular constructs of evolution coming from credentialed elites nearly always featured significant endorsements of eugenics.

Ultimately, whether talking about the broader public square, Catholic culture, or the relationships between them, a number of the big issues in the book’s timeframe still seem to resonate and, perhaps, even unfurl.