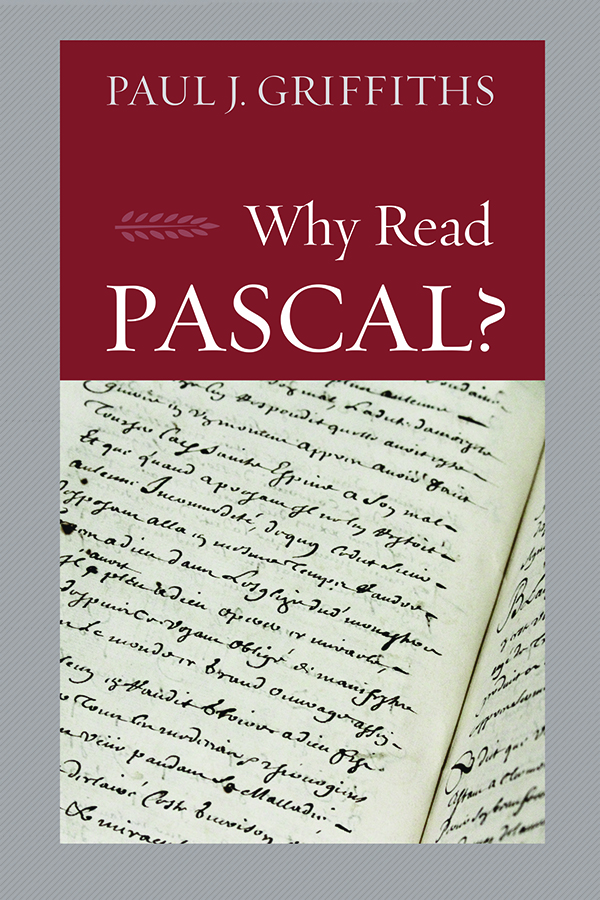 Paul J. Griffiths is the author of Intellectual Appetite: A Theological Grammar (CUA Press, 2009), The Practice of Catholic Theology: A Modest Proposal (CUA Press, 2016) and most recently Why Read Pascal? (CUA Press, 2021).

Catholic Christianity every now and then generates intellectual radicals whose work uncomfortably intensifies aspects of the tradition without moderation or restraint. Blaise Pascal (1623-1662) was one of those. He was an Augustinian of the strict observance, obsessed (the word isn’t too strong) with getting the theology of grace right, and with showing how damaging it is to get it wrong. I’ve been reading him and sometimes teaching him for forty years and more, with a mixture of delight and unease, so when Bruce Marshall and Michael Root asked me in 2018 if I’d write on Pascal for a series they were planning to publish with CUA Press called Why Read… ?, I was delighted to accept. Each volume of the series is to explain why it’s (still, again, now) important to read the writer it’s devoted to, and mine, on Pascal, was the inaugural volume.

I spent 2019 working on the book, and since the series was to be about reading, about what it’s like to read so-and-so, I spent the first month of that year slowly re-reading everything that Pascal wrote with the thought that I might be able to produce something of the flavor of reading Pascal. I’d read most of Pascal’s writings before, of course, some of them many times; but this was an opportunity to slowly go through them all, in French, from beginning to end. I copied out and translated more than one hundred passages that I planned to use as the core of my exposition, and compiled a glossary of Pascal’s terms of art, taking pleasure as I did so both in reading him, and in using the most recent Pléiade edition of his works, edited in two volumes by Michel Le Guern in 1998 and 2000, to do so. (The French do much better than we Americans at enshrining their classics: try comparing the Library of America volumes with those in the Pléiade series; there’s an essay worth writing on what the difference shows about France and America.)

Then I wrote, which took the rest of 2019 (CUA Press published the book in 2021). There were the pleasures I’d expected: Pascal’s remorseless emphasis on the opacity of the human condition; his depiction of our desire to divert ourselves, to amuse ourselves to death, as a way of avoiding that opacity; his clarity about the importance of death; his interest in mathematics, especially the theory of probability, as, among other things, an instrument of explaining ourselves to ourselves; his resistance to Cartesianism; his concern with grace; his awareness of the vastness and strangeness of the cosmos in which we find ourselves; his passion for Jesus; his depiction of habit as the principal driver of human thought and action, Christian and otherwise.

There were also some surprises.

I’d long known that Pascal was a real writer, a stylist, one who delighted in what words can be made to do. Doing little other than read him for a month greatly strengthened my appreciation of him as a writer. He is lucid, surprising, and, when excited by a view that seems to him absurd or risible, fiery and mesmerizing: his polemical style in the Provincial Letters, parts of the Pensées, and the Writings on Grace, is lovely and provoking and extreme: reading it is a little like being branded with a red-hot iron. I was also surprised by the degree of his explicit interest in the act of writing (and reading), and so I began my book with a treatment of his style.

I was impressed, too, by the clarity of his vision about the two central strands in an Augustinian understanding of grace: that there is no aspect or element of the human condition which can be insulated from the workings of grace (we have nothing of our own); and that grace is not given to all. About the first he is abundantly correct, and about the second abundantly not. The benefit of reading him on this subject, especially the Writings on Grace, which are under-appreciated and under-discussed in English-language writing about Pascal, is not to be convinced that he is correct, but to be shown, with great clarity and energy, what one of the distinctive errors of the Catholic tradition looks like when presented by someone who makes it in spades, and thereby (perhaps) to be encouraged to do better. I don’t limit myself, in the book, to restating Pascal: I also argue with him, which I think his writing requires, and which he would have taken as the right way to respond to it.

On the whole, Pascal is worth reading, now as always, because doing so will provoke you to think about matters of essential importance to Christianity and to the human condition, and to do so with all the vigor that is in you.

I conclude with a quotation, for flavor, which I used in French as epigraph to the book. Here it is in English:

The God of the Christians isn’t simply the author of geometrical truths and the order of the elements; that’s for the pagans and the Epicureans. Neither is he only a God who providentially governs the lives and benefits of human beings by giving a happy span of years to those who adore him; that’s for the Jews. Rather, the God of Abraham, Isaac, and Jacob, the God of the Christians, is a God of love and consolation; a God who fills the hearts and souls of those who are his; a God who makes them inwardly aware of their misery and of his infinite mercy; who joins himself to the deeps of their souls; who fills those souls with humility, joy, confidence, and love; who makes them capable of nothing other than himself.