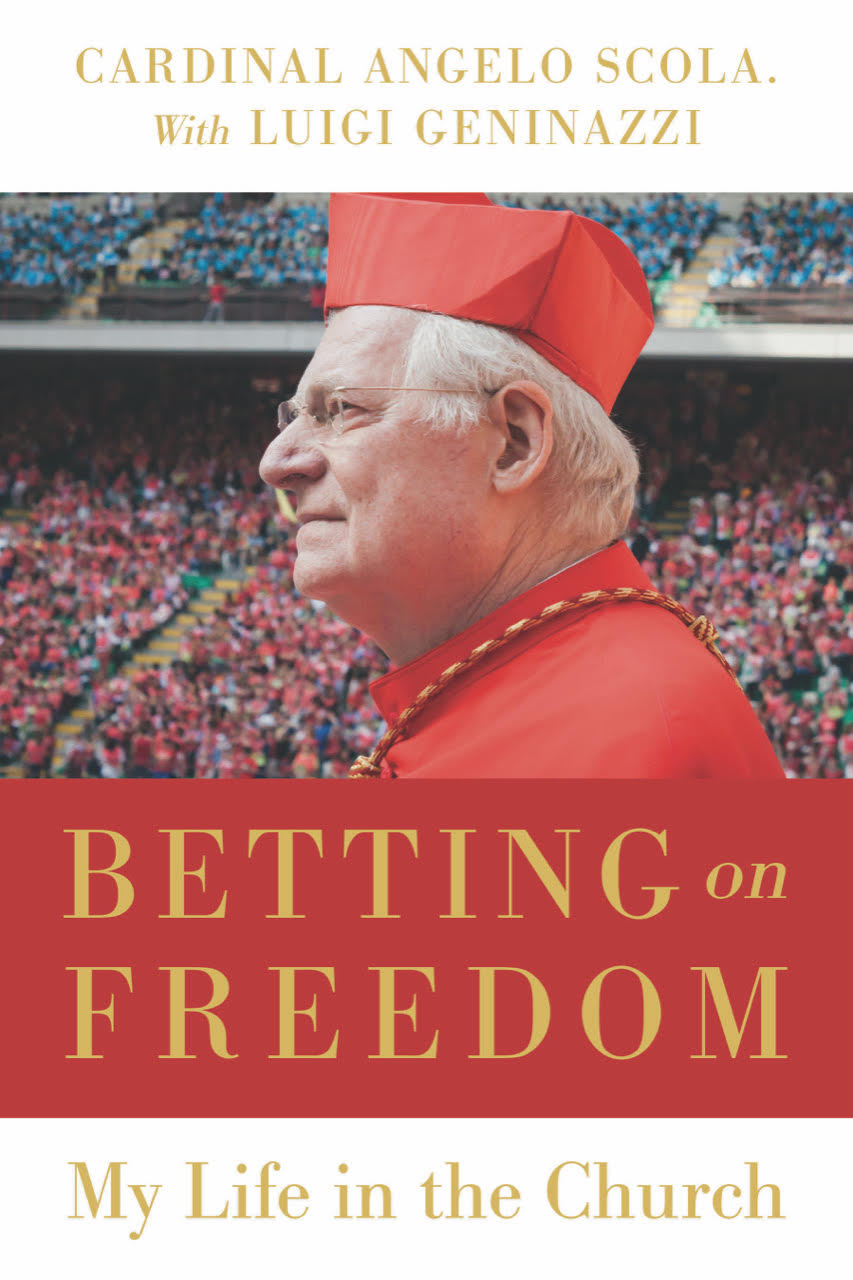 The following is an excerpt from Betting on Freedom: My Life in the Church by Cardinal Angelo Scola with Luigi Geninazzi, translated by Carlo Lancellotti (CUA Press, 2021).

You developed your vocation during your GS years. How did the idea of becoming a priest come about? Was there a precise moment when you made your decision?

When a missionary of the La Salle Brothers came to our school and spoke enthusiastically about his work in Africa. His testimony fascinated me. Returning home, I told my mother that I wanted to become a missionary priest. She brought me to the pastor, who cut me off. If I wanted to become a priest, he told me, there was no need to travel so far. I could do it perfectly well in Italy within my own diocese. And that was the end of that.

The idea reemerged during my first few years in the university. It became a serious prospect when a bout of tuberculosis forced me to interrupt my studies from May 1963 to June 1964. I was forced to spend long periods in the mountains, first at the Alpine House in Motta above Madesimo, then later at the Montanina House in Esino in Valsassina. Far from my friends and immersed in solitude, I had the opportunity to reflect on the Christian journey I had started with GS. I remember feeling a need to make my relationship with the Lord more personal. I began to recite the Liturgy of the Hours every day with an old priest. The rhythm of my daily life was set by the Mass, by prayer, and by the liturgical readings. I constantly questioned myself about the future.

Did you have any romantic ties at the time?

I had been engaged to a girl until May of 1963, but the affective dimension of my life remained unsettled. During the year of my illness, I realized that marriage would not satisfy my desire for fulfillment. Over those same months, the priestly vocation presented itself to me as a very distinct possibility. It was precisely at the end of that period, upon resuming my normal life and returning to the university, that I decided to consecrate my life to the Lord.

Did you discuss the matter with anybody before making your decision?

My choice matured through the experience I lived in GS. It was sustained by my conversations with Fr. Ambrogio Valsecchi, a professor of Moral Theology in Venegono.1 In the Archdiocese of Milan, seminary professors traditionally have pastoral duties as well. They are assigned to a parish where they go each weekend to celebrate Masses, hear confessions, and preach. It is a good custom, an experience that enriches both the professors and the simple faithful. Fr. Ambrogio, who was from Lecco, had been assigned to the parish of St. Nicol. in his hometown. It was there that I came to know and appreciate his intelligence and his heart. He became my confessor and spiritual father very naturally. I made the explicit decision to become a priest during a discussion I had with him in Venegono. This was in the autumn of ’64, if I remember correctly.

However, you did not enter the seminary for another three years. Why is that?

Life is never simple. In this case, many different factors played a part. I had already changed universities, leaving the Polytechnic in Milan, where I had started an engineering degree, to study philosophy at the Catholic University of the Sacred Heart. I had realized that I had little interest in pursuing an engineering career. I had made the choice subconsciously to please my father, who as a truck driver admired the engineers who were his bosses at SAE, a wellknown manufacturer of trusses and electrical wires. Conversely, I was interested in philosophy. Just after my admission into the second year at the Catholic University, however, I fell ill and was only able to take up my studies again in the fall of ’64. Finishing the university was very important for me, and I can say with some pride that I was able to do so in a little over two years. I graduated in February 1967. However, I never abandoned the idea of entering the seminary. I had discussed it also with Cardinal Giovanni Colombo when in 1965 he had called me to be the president of FUCI. He told me to be patient. “For now, get to the bottom of this new experience,” he told me. “Later we shall see.”

At a certain point, I considered becoming a missionary in Brazil, fascinated by the example of Pigi Bernareggi and my other GS friends who had entered the seminary in Belo Horizonte. I went to visit them in the summer of ’66, but my initial enthusiasm quickly turned into concern. The whole group, with the sole exception of Pigi, emphasized political action and revolutionary plans—anticipating the split that GS would experience in Italy two years later. So, I left Belo Horizonte and went to São Paulo.

Fr. Ambrogio Valsecchi, who was also in Brazil at the time, introduced me to the archbishop, Cardinal Agnelo Rossi.2 He was quite willing to accept me into his seminary. Upon my return to Italy, I relayed my impressions to Fr. Giussani, who was disturbed by the ongoing fight among the GS members in Brazil. He pointed out that it did not make sense for me to enter the São Paulo seminary in the midst of such a complicated situation. Meanwhile, I began to participate in the meetings of the “adult group,” those people in CL who intended to choose permanent virginity and who would later take the name Memores Domini.3 I was determined to consecrate my life to the Lord, but the way was still uncertain.

The turning point came in August 1967, during the spiritual exercises at Beato Lorenzo, a Benedictine retreat house near the Subiaco monastery. It was there that I decided to enter the seminary. Some friends of mine reached the same decision—Luigi Negri, Mario Peretti, Marco Martini, and Antonio Bellati.4 At the end of a long discussion, Fr. Giussani hugged us and praised our decision with inspired words. “Your departure appears to leave the leadership of Giovent. Studentesca weaker. However, you are like Sputniks that, though they lift off and apparently leave the world behind, are really launching towards the future.” That October, I began my preliminary year of Theology at the seminary of the Archdiocese of Milan in Saronno.

1. Ambrogio Valsecchi (1930–1983) was a priest and theologian. He taught moral theology at the seminary of Venegono, but found himself at odds with his superiors, who considered his views on sexual ethics heterodox. Eventually, he asked to be laicized and worked as a psychologist.

3. Memores Domini is an association of consecrated laypeople. It was born within Communion and Liberation and was approved by the Church with a Pontifical decree on December 8, 1988. Currently, it has roughly six thousand members all over the world.