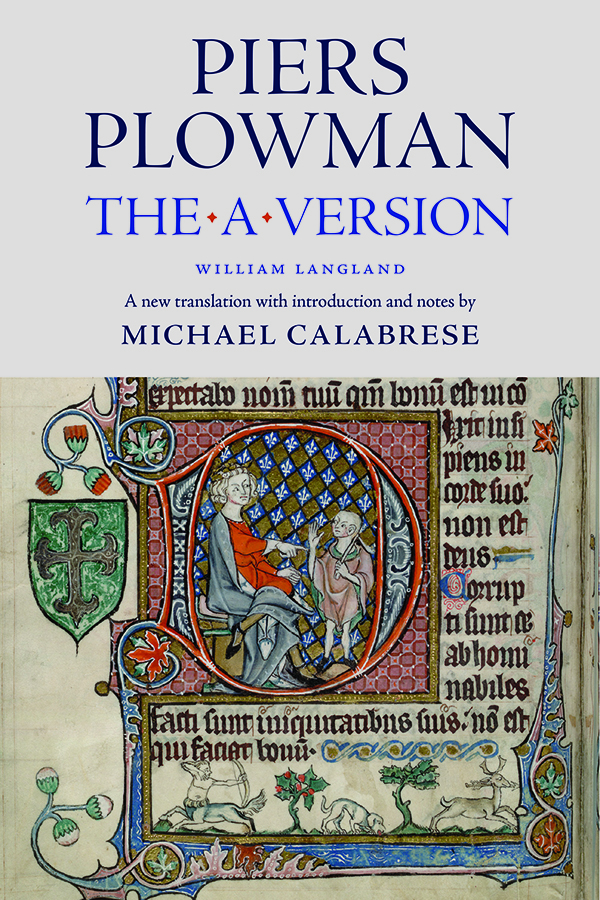 We were delighted to interview Michael Calabrese about his recent translation of Piers Plowman: The A Version, originally written by William Langland in the 14th century. Calabrese is professor of English at California State University, Los Angeles, and the author of An Introduction to Piers Plowman.

Q: One of the most unique aspects of this translation of Piers Plowman is that it’s brought to life in colloquial modern English rather than the formal wording of most medieval translations. Why did you decide to modernize the language of Piers Plowman?

A: I have deemed Piers Plowman “social justice poetry” and in the genre of “social justice pilgrimage,” which demands that the poem be readable, bracing, and engaging for modern readers concerned with the quest for justice in human social history. The poet writes on diverse registers; he strives to be realistic in his depiction of what goes on in a bar at 9AM—something, by the way, that hasn’t changed much in nearly seven hundred years nor from one culture to another. And yet he’s also able to reach a certain contemplative, prayerful level at other important moments. So I drew from my knowledge of both churches and bars in depicting those different scenes.

I do have a pedagogical and ideological motivation: I want to decolonize and demythologize the poem. It should not be seen as some lofty, elite text in the canon of “British Literature” to be read and possessed by a certain privileged class of readers at elite universities. So I try to bring out the nuances that make Piers Plowman a proletarian poem, an East-LA poem as I often argue, about a heroic plowman who leads a lost group of workers to Truth and Justice. In this way, readers who grew up with Cesar Chavez as their local hero can appreciate its characters, themes, and language. Its original readership was of course confined to educated clerics, academics, and bureaucrats, considering how limited literacy and access to texts were in the 14th century. But that was then and this is now; we have democratized access to medieval literature, and my work continues the social justice project of making medieval poetry real, tangible, and accessible to modern readers. I did not bastardize the poem or create only a modern adaptation (it’s a real translation), but I did try to convey its language, its conversational tone and textures—where relevant—and to bring out its sacred dimension as well.  These alterations are essential to conveying the sound and sense of the poem.

Also, I wanted the experience to be fun, and so I sprinkled in a bunch of pop song lyrics, often from Southern California band such as the Beach Boys and The Mamas & the Papas, and also references from gangster movies, Hollywood film noir—a bunch of  Easter eggs, so to speak, that students and readers can enjoy finding and sharing.  For example, at one point when the dreamer encounters an allegorical character named Holy Church, he says “I got down on my knees, and I began to pray,” a quotation, adjusting one word, from the song California Dreaming.

Q: What do you most hope modern readers will get out of reading this 14th century tale?

A: I think what students will gain here is “access” to this extremely important part of social history. Piers Plowman is about faith, food justice, labor, equity, and treating people well.  But it’s also about corruption and competition—forces that destroy community.  Piers is about hierarchy, privilege, condescension, imperiousness, elitism, classism, mockery—all the struggles, hopes, and deprivations that inform the battle between rich and poor, between the self-appointed elite and the honest working people.  It’s about the unequal distribution of wealth and resources, and it engages with any host of issues of constant importance to us as members of our various nations, cities, and societies and as part of the global community.  I’m very happy to make all these rich themes present for students.

Also, there is a dramatic, personal component to the translation, for in my acknowledgements I discuss my parents and grandparents and connect the major themes of the poem to the theme of ancestry.  I find in my parents Orlando and Beatrice Calabrese, who never even finished high school, an untold, undocumented history of natural wisdom and of noble physical labor—the major concerns, as it turns out, of Piers Plowman.  I do this as an invitation for all readers, but specifically those who are first generation, working class children of immigrants or immigrants themselves, to connect to the poem through an awareness of their own families and lineages. To me, this is an exciting new way of creating and framing scholarly work in literary studies.  If I have done any good as a teacher and a scholar, that good lies here.

Q: How did your own understanding of the Christian life change as you followed Will’s journey of faith?

A: I would say as a Catholic Christian that reading this poem, just objectively and not imagining myself as the translator, I’m struck by the quest for mercy and compassion and how important those elements are in our daily lives. Moments of the greatest quietude, calm, and peace arise when characters in the poem realize that love can inform personal, social, business, and institutional relationships. So one could read this poem and internalize a deep sense of charity and compassion toward others; we may indeed find those virtues lacking in our own lives. Piers Plowman makes you think about others, about how vulnerable and needy we all are, even those who consider themselves smart and elite. It turns out they are not as smart as they think, but they still merit compassion, perhaps all the more so for their hypocrisy.

Q: One of the many joys of Piers Plowman and other narrative poems are the allegorical side characters encountered along the way. After studying the text so intimately and working with it for so long, which side character or interaction has stuck with you the most?

A: Well, if you were going to give an Emmy Award for best supporting actor or actress in Piers Plowman, you have a lot of candidates. I think Dame Study is really fascinating because she is a professor figure.  This poem has a lot of powerful female figures. No need to wait for The Chair with the great Sandra Oh!

The male characters are another story. Everybody loves Glutton because of the scene of his drinking and other escapades, but I think Envy is currently my favorite figure from the confession of the Seven Deadly Sins. He exemplifies the kind of competitive hostility that you see everyday in the real world, where people smile and pretend to be your friend but really they’re just seething with hatred of you for any good fortune that comes your way. This is a very compelling exposure of what’s unspoken between people in the real world. This poem reveals a lot about the dynamic between people—emotions that keep us apart and keep us in a state of perpetual conflict with one another. I hope readers will have their favorites too. I tried to make these characters spring to life.