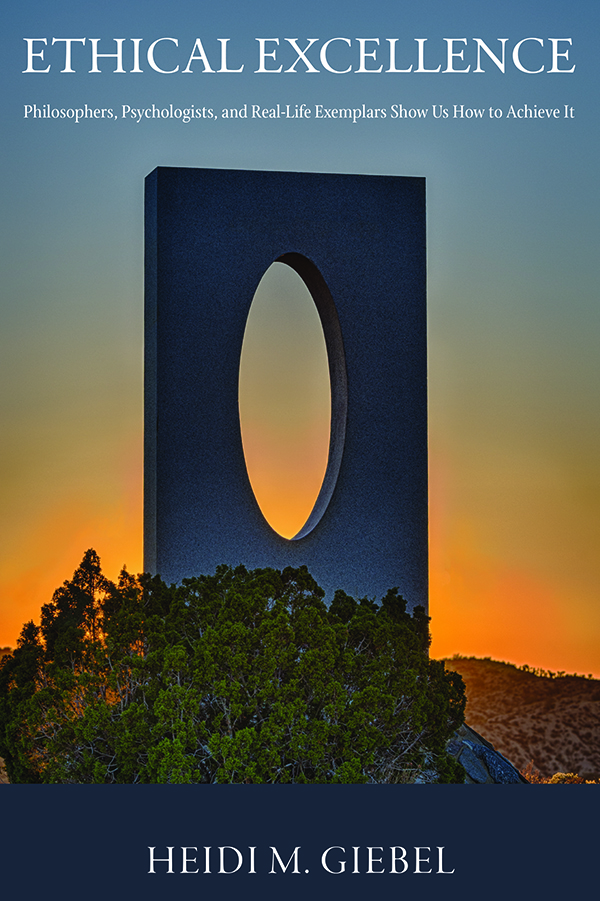 Heidi M. Giebel is professor of philosophy at the University of St. Thomas, Minnesota and author of Ethical Excellence: Philosophers, Psychologists, and Real-Life Exemplars Show Us How to Achieve It (CUA Press, 2021).

Like many academic authors, I suspect, I was initially motivated to write Ethical Excellence primarily by my dissatisfaction with the available offerings. The elusive ideal book was a sympathetic treatment of virtue ethics—but not just any treatment: I wanted something philosophically serious but accessible to non-specialists, something comprehensive enough to provide a big picture for undergraduate students while also taking a deeper dive into key concepts and virtues, something drawing insights from multiple theoretical sources and also giving numerous real-life examples, something that gave due attention and respect to time-tested classical texts without neglecting current empirical research. Could there even be such a book?

As Toni Morrison said, “If there’s a book that you want to read, but it hasn’t been written yet, then you must write it.”[1] So that’s what I did… eventually. On the theoretical side, and thanks in large part to the opportunity to participate in a six-week seminar on Confucianism and contemporary virtue ethics, I aimed to compare and combine insights from the classical “Socratic” (Plato, Aristotle, and the Stoics) and Confucian traditions. And thanks to a grant, I was blessed with the time and resources I needed to expand my psychological knowledge and narrative illustrations and to integrate them with the theoretical treatment of virtue ethics. Even better, the grant allowed me to pay sixteen (apparent) moral exemplars—people who had won national or international awards for significant, long-term, meaningful service to others—to spend two to five hours telling me their life stories. Those stories fit even better than I’d dared hope with my theoretical discussions of virtues and related concepts. For example, many of my interviewees seemed to have “signature” virtues: one showed exceptional gratitude, another humility, and another honesty. Others illustrated ways to build virtue and avoid vice: e.g., by exercising willpower and refusing to rationalize away—or ruminate on—bad qualities and actions. And one interviewee, an intellectual and author at heart, even gave me great advice about how to write an engaging book.

This project was by far the most fun I’ve ever had doing research. And the psychological and narrative parts of it grew from perhaps ten percent of the book’s content in the project’s early stages to around half of its content in the finished product. That’s still a lot of philosophy—the book is 400 pages long—but it’s also a good amount of psychology and biography. Here is how I describe their integration, and my rationale for it, in the introduction:

Philosophical wisdom is inspiring—I’ve been hooked on it since the first day of my freshman year in college. A classic work of philosophy—say, from Plato or the Confucian thinker Mencius—is the sort of text you can come back to again and again and get something new and profound from each reading. Well, at least you can if you understand it and know how to apply it. But of course, that part is far from automatic: philosophy is an abstract discipline—it deals in things like logic and principles—and sometimes understanding it can be hard work. And even when our work is rewarded by a good grasp of the abstract principles, we still have to apply them to our lives: theory without any application risks uselessness. These classical philosophers, as wise and profound as their writing was and still is, were writing in a time and place very different from ours. Sometimes their own applications of their theories seem obscure or old-fashioned, leaving us with incomplete guidance. …

Psychology, on the other hand, is very concrete: if you read an article in an academic psychology journal, it will tell you exactly how many people participated in the study, what they did, and what the results were. There will be several charts giving you as much hard data as you could possibly ask for. And in the bigger picture, psychology can give us great insight into how people’s minds work—and what methods, at least in general or on average, will be effective for things like forming or breaking habits or taking control of our emotions. And that’s great too—but, like philosophy, it has its limits. The limitations of an empirical discipline like psychology become especially apparent—and problematic—in the area of ethical development. I’ve seen far too many articles attempting to show that this or that method is especially effective (or not) for promoting ethical development in the group studied—but the authors didn’t bother to define (or maybe even to think about) what ethical development actually is. What kinds of change in our beliefs, values, or behavior count as ethical development (progress), and what kinds leave us ethically stagnant—or even regressing? What is the ultimate goal of ethical development? These aren’t empirical questions; they are philosophical ones. Leaving them unanswered—or merely guessing at the answers—can put us on a very efficient path to a bad place. In other words, just as principle without application risks uselessness, technique without principle risks recklessness.

Suppose, thanks to strategic reading in philosophy and psychology, we have an adequate grasp of the theory and the application of ethical development—the principle and the technique. Will that be enough to get us started on our own journeys toward consistently acting on those good ethical principles? Not quite—at least not unless we’re extraordinarily optimistic and self-motivated. Without accessible real-life examples of how people like us have enacted and embodied our most important principles and values, most of us will be left not knowing where to start—and not at all confident that our goal is even achievable. Even if we bypass the two dangers of uselessness and recklessness, we may not be able to escape a third: hopelessness.

To help us avert those three dangers, then, philosophy and psychology inform each other to point us down the right path, and the real-life stories of moral exemplars are crucial for providing us concrete models we can readily apply in our own lives. For example, in a chapter on benevolence and generosity, a theoretical discussion of these virtues and opposing vices drawing from Confucian and Socratic sources connects with psychological research on altruism and empathy and with stories and quotations from exemplar interviewee Gloria Lewis: an immigrant from Barbados, she overcame numerous challenges including poverty, infidelity, and abuse and now serves to the homeless hundreds of home-cooked meals (literally cooked in her own kitchen!) each week while holding down a full-time, working-class job. A chapter on humility defends it as a genuine virtue in the face of ambivalence from both philosophers and psychologists regarding its definition and status. It also discusses the example of interviewee Noah Levinson: upon hearing from a consultant that he was the cause of the interpersonal problems among his staff, he not only changed his ways but brought the consultant onto his leadership team long-term—and later married her! And a chapter on gratitude, in addition to diving into Stoic theory and advice on its cultivation and exercise, surveys empirical research on the benefits of gratitude and tells the story of Sister Toni Temporiti, founder of a microfinancing nonprofit, whose life narrative as she tells it is permeated with expressions of how wonderful her life has been and how blessed she is. In fact, when I asked her what she thought was the theme of her life story, Temporiti said, “I think it’s being blessed. Really feeling blessed, and having been given so much that it’s impossible not to pass it on.”

I feel similarly blessed to have had the opportunity to learn from her and so many other virtuous exemplars; I hope that my book can in some way be a blessing to others as well.

[1] Toni Morrison, speech given at the annual meeting of the Ohio Arts Council, 1981.