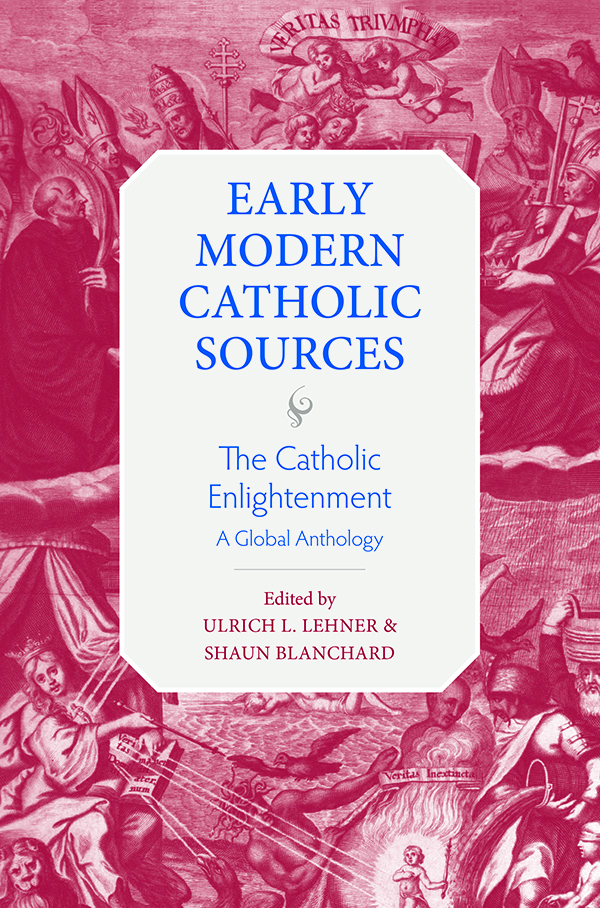 We were delighted to conduct a joint interview with Shaun Blanchard and Ulrich L. Lehner, the editors of the newest book in our Early Modern Catholic Sources series, The Catholic Enlightenment: A Global Anthropology. Blanchard is assistant professor of theology at Franciscan Missionaries of Our Lady University. Lehner is the Warren Foundation professor of theology at Notre Dame University.

Q. I think it’s safe to say that one of the main focuses of The Catholic Enlightenment: A Global Anthology is diversity—not just in the writers’ countries of origin, but also in their vocations, genders, and topics. Why was this important to you when deciding what to include? What challenges did it present?

Lehner: Church history and historical theology have too often neglected to pay adequate attention to the diversity of voices after the end of the Middle Ages. We have many studies about medieval women and lay people, but hardly anything about their role and influence and participation in the post-Trent church. We are especially lacking in translated primary sources. Moreover, hardly anybody paid attention to or recognized the contributions of Catholics in the Southern hemisphere. We wanted to signal how important it is to recover this dimension, not only because Catholicism became truly a world religion after the Council of Trent but also because Catholic history without the voice of women gives us only a fragment of the real story.

Blanchard: We knew from the get-go we wanted to do justice to women writers and to the southern hemisphere. The challenge of including such diversity of contexts and voices was that a kind of unified vision can be lost, or at least difficult to discern. But it’s a risk worth taking. There are definitions of Catholic Enlightenment that are very focused. For example, some see it as a fairly coherent intellectual and religious reform, associated with Muratori and Benedict XIV, that peaked ca. 1730-50 and then declined. Others associate it with aggressive and generally anti-papalist and anti-Jesuit currents in the final half of the century. Both of those conceptions pinpoint certain expressions of Catholic Enlightenment, but as the work of Ulrich and others has shown, Catholic Enlightenment is broader than either of these. It stretches the entirety of the eighteenth-century (and then some) and can and should include non-Europeans, Jesuits, etc.

Q: Both of you have spent significant amounts of your careers focused on the Catholic Enlightenment. What is it about this specific period that captures your attention?

Blanchard: Growing up in North Carolina, the eighteenth-century was always about the Founding Fathers and the American Revolution. I don’t think I saw Catholicism as historically interesting or important in the period after the counter-reformation and before waves of Irish immigration and the age of Newman and Vatican I (1870). I think I had unconsciously absorbed an Anglo narrative that was, ironically, shared by both liberal “Whig” and Catholic “ultramontane” authors – that the 18th century was a period of stagnation and irrelevance for Catholics. In grad school, as I explored the problems and questions that 20th century Catholics were faced with – liturgical reform, religious liberty and relations between church and state, ecumenism with Protestants, papal and episcopal authority, the role of the laity – I realized that brilliant, passionate, faithful (and sometimes sinful and prejudiced) Catholics had actually been debating all of these issues, very explicitly, in the 18th century. As I explored the primary and archival sources, especially related to Jansenism and Catholic Enlightenment, I came to love studying this era on its own terms. I could happily spend the rest of my life learning and writing about these extraordinary people living in an era that so profoundly shaped the ecclesial and secular world we live in today.

Lehner: I love the eighteenth century – perhaps because I grew up in a European city with baroque houses and churches, whom already my forefathers attended or helped build. It was always a century I could easily relate to, but I came to realize that in academic studies it was one that was surprisingly under-researched in religious history. Apart from a few studies, nobody had really undertaken the task to wrestle with the question of how Catholics dealt with the ultimate challenges of modernity then. After all, faith had become one option among many, rival worldviews emerged, and scandals shocked the faith of believers. The Catholic Enlightenment faced very similar challenges the church faces today – and I find it fascinating what answers she then accepted, played with, or rejected.

Q: Why do you think it’s important for Catholics to learn about the Catholic Enlightenment?

Lehner: The challenges we face today are almost all nothing new. Be it the demand for abolition of celibacy or remarriage, changes of the liturgy, of sexual morality, the end of the death penalty, the compatibility of science and faith … all this was debated already in the Catholic Enlightenment. By consulting the sources of how these thinkers dealt with these challenges and questions, we can learn what worked, what didn’t, what led to confusion and disharmony, and what allowed unity and harmony to grow. Moreover, for these thinkers, the tradition of the church was much richer than for us today. Often theologians today only know a bit about patristics, a bit about Aquinas, bits about Newman and then Vatican II. For an eighteenth-century theologian and philosopher the Fathers were just as present as Scotus, Aquinas, Bonaventure but also Suarez, Teresa and John of Avila, Berulle, Malebranche and Descartes. Thus, their answers were as diverse as were their sources, but they were grounded not in a narrow view of tradition, which highlights only the top five writers and councils, but instead gave the whole breadth of the past a just hearing.

Blanchard: I couldn’t agree with Ulrich on this more. We desperately need to recover the fullness of our tradition. We Catholics talk all the time about “historical consciousness” as a philosophical category or orientation – and that is all well and good – but we have to learn and teach the full sweep of our history and engage with the actual facts directly. We are an Incarnational faith – we believe God quite literally entered into history – and therefore the line between church history and theology should be a lot messier than it is. To really wrestle with early modernity should lead one away from both a manic progressivism and a triumphalist traditionalism. It should lead us toward the kind of posture Pope Benedict talked about in his 2005 Christmas address – a posture grounded in faith but open to new learning and to dialogue with the world.