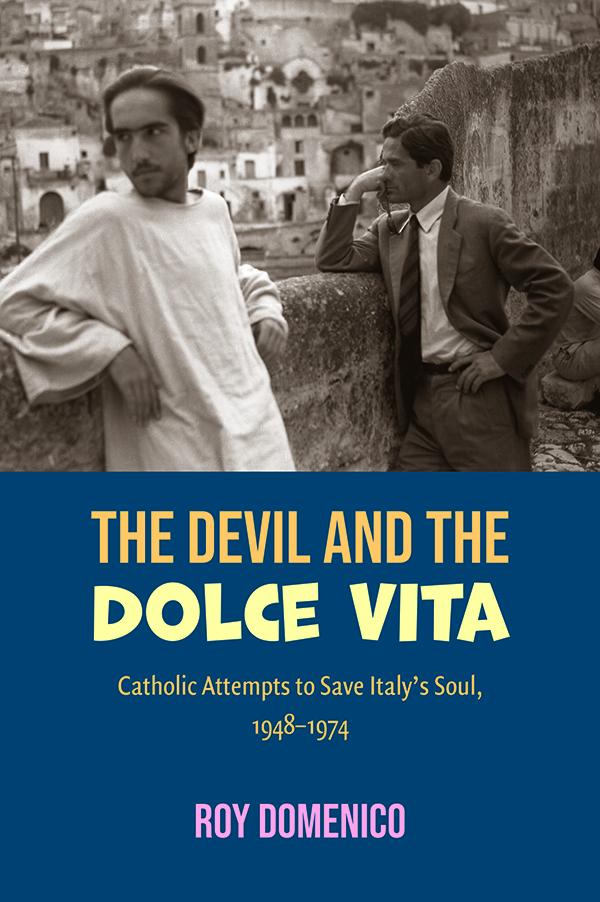 The following is an excerpt from The Devil and the Dolce Vita: Catholic Attempts to Save Italy’s Soul, 1948-1974 by Roy Domenico, a new paperback from the Catholic University of America Press.

Federico Fellini’s iconic film La dolce vita concludes one early morning on a beach near Rome. The central figure, Marcello, played by Marcello Mastroianni, sits in the sand, his head muddled after an evening’s debauched revels. He looks up when he hears someone calling to him from across a rivulet. It is Paolina, played by Valeria Ciangottini, an innocent and pretty teenager who works at a seaside bar recently visited by Marcello. In a modest black dress with a dainty lace collar, she can be read as a nostalgic metaphor of a fading Italy, a land of honest, generous, and devout people, the salt of the earth. In his jazzy get-up, Marcello represents the modern, self-absorbed, and cold Italy; and he fails to understand Paolina. The two cannot connect, although she tries and tries until the sad truth becomes apparent. On his side of the beach, another party-goer calls Marcello; it’s time to go. He nods, gives Paolina one last look, turns, delivers a limp wave, and lumbers off. Fellini then focuses on Paolina’s sad smile and follows her face as it turns from looking at Marcello until she finally gazes into the camera and at the audience, who watch for a final, painful moment before the film fades to black. Upon its release in 1960, La dolce vita seized the imagination of Italy and the world, not only as a brilliant work of art, but as something of a warning. Paolina’s world and the souls of the good people that inhabited it were in danger.

This work discusses the cultural politics of Italian Catholics during the roughly thirty years after the Second World War. It deals with those who understood and perhaps identified with Paolina; it explores their sentiments and their efforts to renew what they saw as a traditional Catholic ethos. For much of the century and a half that preceded Fellini’s film, this spirit had suffered significant challenges from an expanding “lay,” or secular, culture represented across the political spectrum, from liberals and Masons to Marxists and Fascists. Much of what follows is roughly chronological, although chapters 2 and 3 offer examinations of two of the most important and closely linked battlefields of the Italian Catholic culture wars—namely, the media and family matters. This study casts light on attempts to influence or censor the media based on Catholic morality and to exalt and protect traditional familial and sexual relationships. Catholics’ use of such terms as buon costume (proper comportment) or pudore (shame) revealed their attitude toward conduct at home and on the street. They took cues mostly from three leads: the church itself, the chief Catholic party, the Christian Democracy (Democrazia Cristiana, or DC), and the laymen’s association, Italian Catholic Action (Azione Cattolica italiana, or AC). All three presented a vision of a revitalized Christian culture—one of proper comportment and sexual ethics—that revealed what one historian termed Italy’s “strange rapport with moralism.”1

Italian Catholics were not alone. Europe’s most determined postwar effort to temper politics with religion probably occurred during Francisco Franco’s dictatorship in Spain, when the church strove “to create a fortress of faith and virtue isolated from a corrupt secular world.”2 The war, of course, dampened authoritarianism and strengthened more democratic impulses in Western Europe. Among Europe’s free nations, therefore, Italy tried as much as or more than any other to protect its Catholic identity, efforts made more striking in that they took place in the land of an ancient and extremely powerful church and the capital of Catholicism. West Germany, particularly under Konrad Adenauer’s Christian Democratic governments from 1949 until 1963, offers the clearest analogies. Heide Fehrenbach, for instance, showed how German Catholics and the Christian Democrats labored to infuse motion pictures with their vision. Women maintained a special place in that vision, with strong echoes in the Italian case.3 In France, the Jesuit Emmanuel Flipo’s campaign to ensure a Catholic presence in film production and criticism met with failure, mostly because he enjoyed little backing from the church or from Catholic organizations. Compared to Italy, his looked like a lonely crusade.4 Among the smaller nations, Ireland’s traditionalist Catholics put up the greatest fight against the forces of secularization, much of which backfired and fizzled in the new millennium. In non-Catholic Europe, Britain sometimes looked similar to Italy. The Church of England and government officials, like the home secretary William Joynson-Hicks in the 1920s, struggled on behalf of traditional culture, although he often stood alone among his cabinet colleagues. A few decades earlier, in the United States, Anthony Comstock, a postal inspector, led a famous campaign against obscenity.5

Italy’s postwar politics also offered special opportunities to wage a culture war on a large scale. This work begins on April 18, 1948, when Christian Democracy scored a major electoral victory that established what some critics derided as a “clerical regime” and allowed it to dominate Italian politics. It ends with the Referendum of May 1974, which confirmed the legality of divorce and dealt the Catholic agenda a devastating and irreparable blow.6 From then on, the faithful witnessed a decade-long unraveling of their hopes, so that by 1985 the historian Pietro Scoppola, among the most prescient observers of Catholic struggles, acknowledged “a profound and radical devastation of all traditional cultures and preexisting collective identities.” He concluded that, indeed, “postwar Italy did not witness the birth of a ‘New Christianity,’ but a secularized society.”7